I spent this past weekend at Ricketts Glen State Park in Pennsylvania with three friends, who are also serious photographers. We left early Friday morning in order to begin hiking through Ricketts Glen and photographing the park’s 22 waterfalls that afternoon. I had photographed the waterfalls at the park this past spring, but on this trip my goal was to photograph them framed by the autumn colors of the surrounding trees, and if timed properly, the trees would be at their peak color. I also was hoping that there would be many colored leaves on the ground around the base of the falls to add color to the rocks and cliffs surrounding the falls. 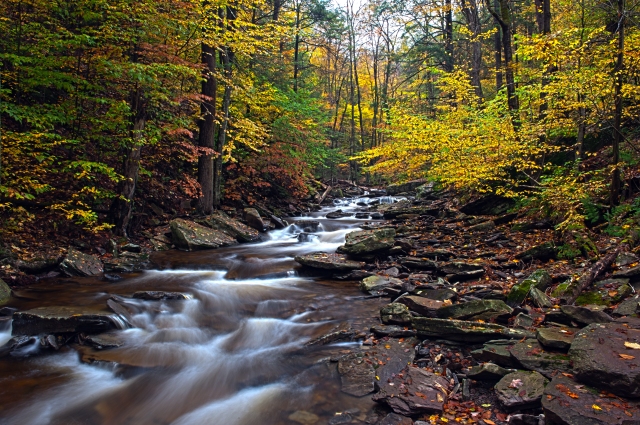 We timed the trip right for a number of reasons. As you can see from the images in this article, the autumn leaves peaked last week, and so there was plenty of color on the trees. Since the leaves had just peaked, and also because of a lot of rain last week, there were plenty of leaves on the ground around the falls. In addition, the rain last week, as well as on Friday when we first arrived, made the falls flow heavily.  Due to all of the rain, much of the flowing water was brown from the run-off of surrounding soil. The brown color in the water added to the beauty of what we saw and captured digitally. Finally, with regard to perfect timing, Friday and Saturday were very overcast days making for ideal waterfall photography (filtered light and low contrast).  We photographed 21 of the 22 falls. The 22nd was skipped because it was one of the smaller falls, and we were worn out.

Although the conditions were perfect for photography, it was very treacherous on the trails that paralleled the rivers and falls in the park. A significant amount of the trails are on very large rocks that were wet from the rain and mist from the falls and also covered in wet leaves requiring us to move cautiously. This was made even more difficult by all the photography gear that we were carrying. We were either hiking down steep slopes and cliffs or up them as we followed the rivers. There were a few slips and falls and a broken lens, but fortunately there were no serious injuries. There was one very close call, when one of the other photographers slipped on the edge of a large bolder that hung over the top of one of the waterfalls, and began sliding toward the river. It was a scary moment! 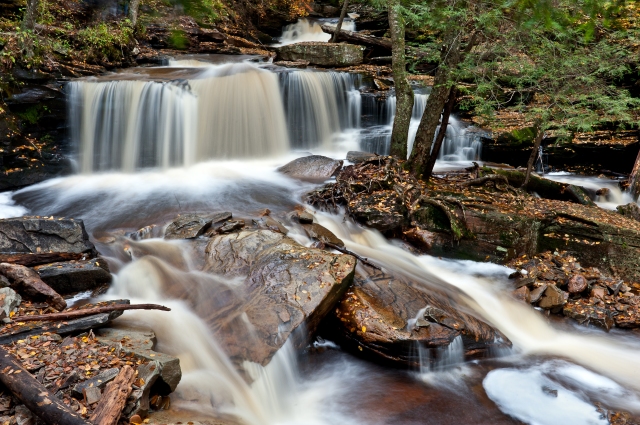 I have just started to process the images from Ricketts Glen and some of them were included in this article. As I progress through them, I will add more to another blog article, as well as to a gallery on my website. The gallery is located at:  http://stabone.com/p973245629

As you can see from the above image, the flowing rivers were as picturesque as the falls. One final image…

Ricketts Glen State park is a very unique park having so many waterfalls in one location. It is a nature photographers dream location. I will return. It would be a great place to photograph in the winter after a light snowfall, but also potentially very dangerous to hike.