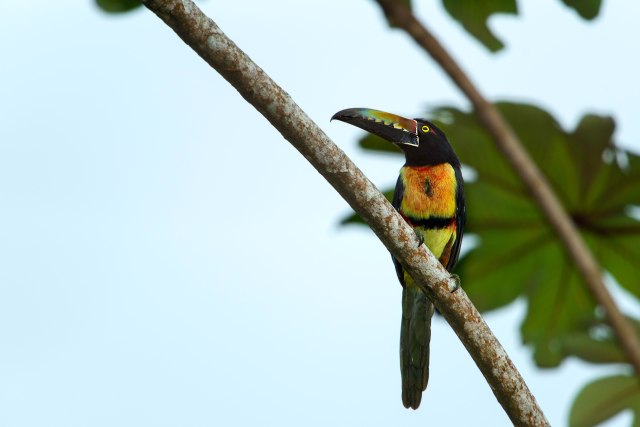 While at Pico Bonito National Park, Honduras, in late January and early February, I fulfilled my expectations of photographing many amazing birds and wildlife. It was my first time there, and I did not know what to expect–that is, how difficult it would be to find and photograph Honduras’ wildlife. I also did not know how often it would rain in Honduras’ rainforests, where rain certainly was expected, and where rain could make it difficult to impossible to be outdoors with photography equipment that could easily be seriously damaged. As it turned out, it only rained one afternoon and a couple of evenings. Therefore, rain was not a factor. Nevertheless, I was prepared with all kinds of rain protective coverings for my gear, but it was never used or needed.

Other than the weather, the other two key considerations potentially impacting fulfilling my expectations were (1) would the wildlife be where I was at the time I was there, and (2) how difficult would it be to get a good photograph considering the availability of light and whether the wildlife would be visible enough to get clear shots in a jungle/rainforest environment. Again, like the cooperation of the weather, it turned out there was an abundance and tremendous diversity of wildlife, in particular birds of various species.

Regardless, it was a challenge and work (term “work” used loosely, because I loved very minute of it) to get good images of the wildlife and birds that were often hidden in the thick, lush and shaded rainforest vegetation and that were most often moving about and trying their best not to be seen and blend into the environment. It was also “work,” because I was lugging around all day over 25 pounds of camera gear on rainforest trails trying to avoid falling or dropping my camera, which consisted of a Nikon D800 with a battery grip, 600mm lens with a TC14 teleconverter mounted on a Wimberley head on a Gitzo tripod and a speedlight with a Better Beamer. On a couple of days, I also carried a second camera, Nikon D700 with either a 24-70mm or 70-200mm lens. Miraculously, I did not slip and fall or drop my cameras, but I was constantly soaked from the rainforest’s heat and humidity. Sounds bad, but it was a fabulous experience.

While there, I started out each day around 0630 meeting my guide after an early breakfast, and we would stay out wandering around the trails leading from the Lodge at Pico Bonito, where I was staying. A couple of mornings, I skipped breakfast or lunch in order to stay out on the trails. I also chose to stay at Pico Bonito, when the group I was traveling with went to the coast for the day.  Later in the week, I decided to stay at Pico Bonito for two more days after the group departed for Copan near the west coast to see Mayan ruins. It was very tempting to go with the group to the coast and to Copan, but I was intent on seeing and photographing the wildlife in Pico Bonito. As it turned out, the days I remained at Pico Bonito alone with my guides were very productive and I was able to see and photograph many more birds and other wildlife.

One of the birds that I was able to see and photograph on several days were Collared Aracaris, which are fairly common in lowland areas. Of all of the birds and wildlife I saw, the Aracaris were my favorite, although the Keel-billed Toucans and Motmots come in as a close second. The images in this article are of Collared Aracaris. 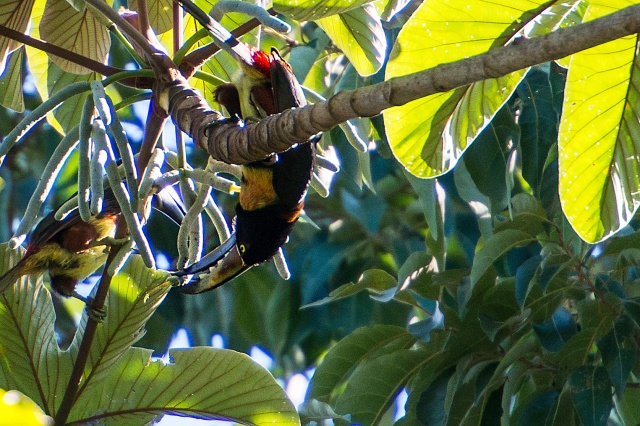 Collared Aracaris are related to Toucans and have similar large, oversized bills–about 4 inches in length. Their antics were very interesting to watch as they fed in the trees overhead. They are highly social birds and are generally seen in pairs or small groups. Males are indistinguishable from females.

As you can see in the images in this article, they are very colorful with bright yellow chests and a large patch of red feathers on their lower bodies above their tails. They eat the fruit from Cecropia and palm trees, as well as insects, small reptiles, eggs, and sometimes even other fledgling birds.

Collared Aracaris live and breed from Mexico through Central America. They nest in tree cavities, as seen in the above and below images. I was fortunate to see and photograph this Aracari thanks to Elmer Escoto, the guide that spent the day with me on my last day at the Lodge at Pico Bonito. I told Elmer when we met early in the morning the birds I hoped to photograph on that last day, and high on my list were Toucans and Aracaris. Elmer’s timing in taking me to a nest was perfect, since a pair of Aracaris were working on the nest to prepare it for a new brood. According to Elmer, it was too early for them to have laid eggs, and as he pointed out, their bills were scratched from working in the nest. In fact, in some of my images, I could see the Aracari removing debris from the nest hole in the tree.

As you can see from the images in this article and others on my website, my expectations were highly exceeded.