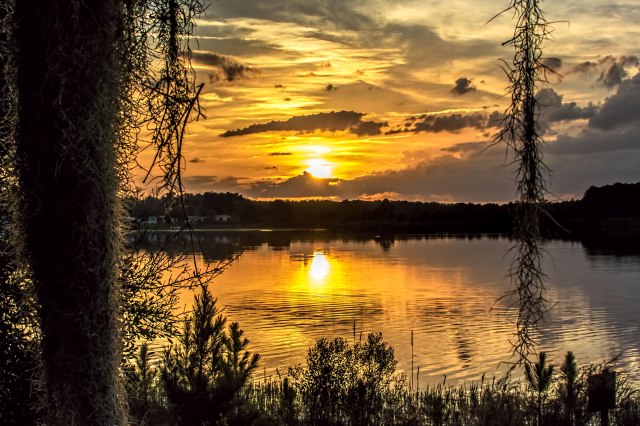 In early January, I spent a week in Gainesville, Florida, and while there visiting my daughter, I was able to squeeze in some photography. One afternoon, we joined my daughter with some of her friends at Mill Dam Lake in the Ocala National Forest. We stayed long enough to see a beautiful sunset across the lake. 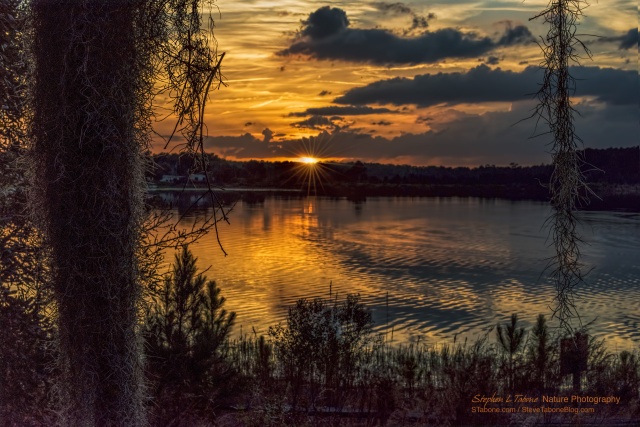 The following day I captured, and previously posted, images of a young American Alligator perched on its mother’s head. Below is one of those images. This alligator behavior is not often seen and rarely photographed. 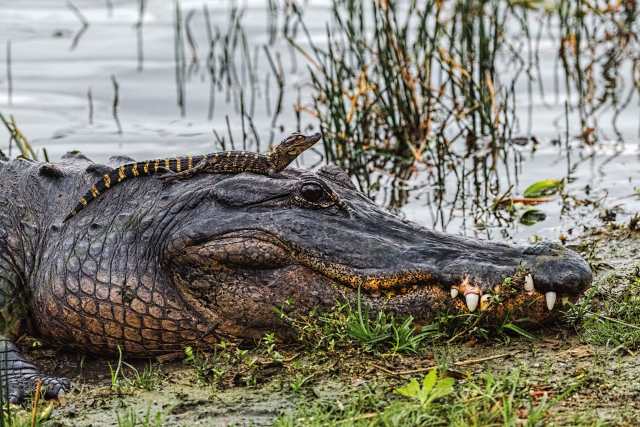 The same day I photographed the above alligators, I shot the below images of Black-bellied Whistling Ducks at Paynes Prairie Preserve State Park. In the first image, the ducks were very aware of my presence. To see me more closely, they stretched up their necks and watched intensely. It was not long after spotting me, that they all flew off, as seen in the below image. Black-bellied Whistling Ducks get their name from their call, which sounds much like a whistle–they do not quack! 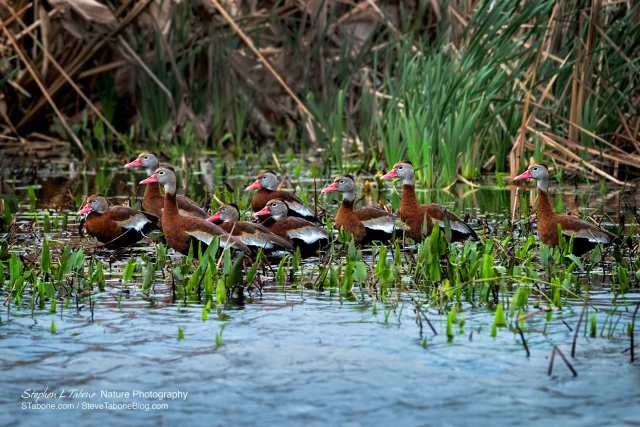 Two days later, my friend Ernie Sears joined me as we explored and photographed Paynes Prairie and Cedar Key. Some of my favorite images while shooting with Ernie follow. 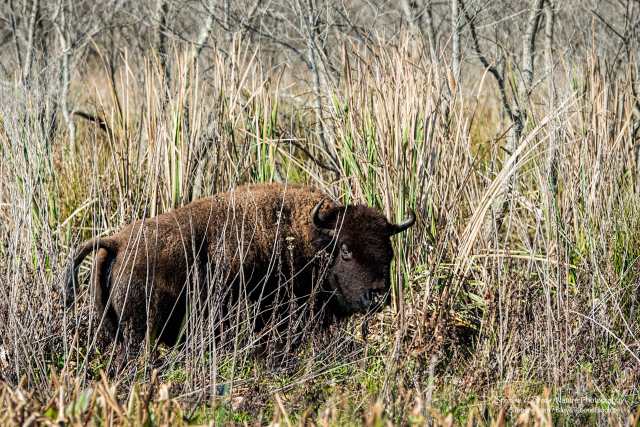 Above is one of the many bison that freely roam Paynes Prairie. In the above image, as I was trying to get a good shot of a bison that was heading away from me and into thick reeds and undergrowth, the bison turned to at look me, eye-to-eye (and camera), before heading deeper into the reeds. Notice how the bison’s tail is raised. That behavior is a sure sign of one of two things. One the bison is potentially aggressive and could charge, or two, the bison is about to fertilize the Prairie. Fortunately, it was number 2.

Below are three images of a Green Heron that I spotted deep in a thicket surrounding a small pond. The heron sat still as we worked our way around the thick undergrowth to get a different view. While shooting, I noticed the heron reach down and snatch something. I could not tell what the heron was doing until later when I looked at the images. Then I could see the heron had caught a small Anole. Click on the second image to see the poor little Anole. 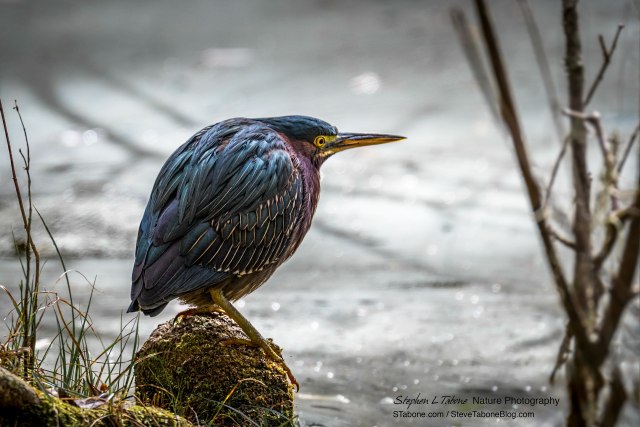 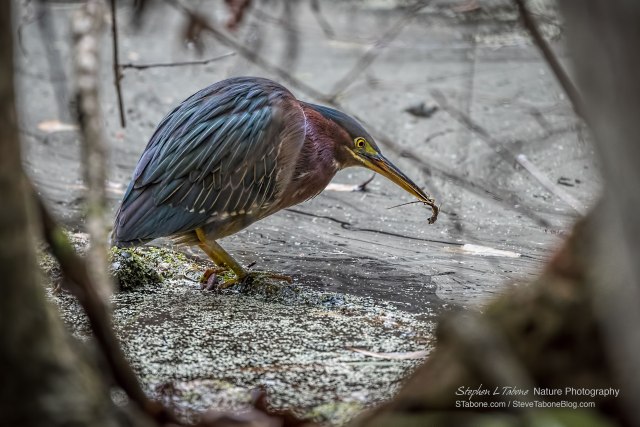 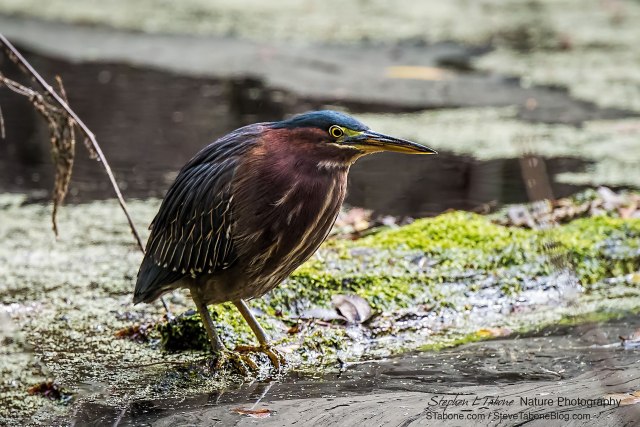 In the below image, I photographed a Great Blue Heron that flew into a Spanish moss covered, old oak tree on the edge of Lake Wauburg in Paynes Prairie. The heron perched in the tree looking over the lake for its next meal. The gray, blue colors of the heron blended in well with the similarly colored moss and background across the lake. (Click below to see the heron) 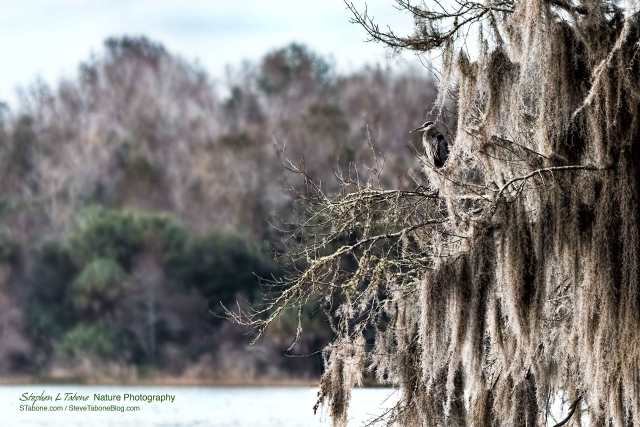 Shortly after photographing the heron, an Anhinga swam nearby with a fish that it had just speared. It was heading toward the shore to enjoy its catch. Timing with a bit of luck helps to capture such shots. 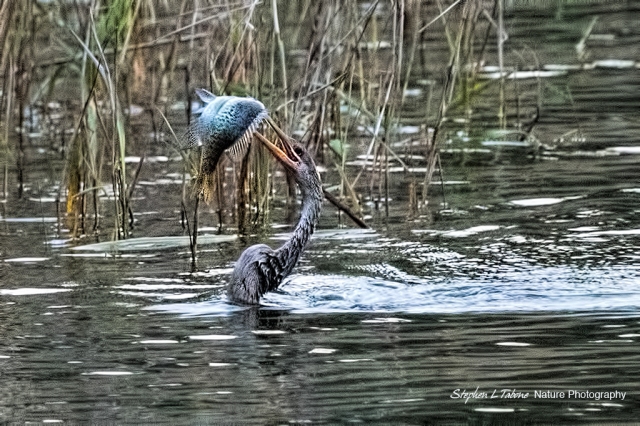 Later that day, Ernie and I walked the La Chua Trail on the Prairie heading to the observation platform at the end of the trail. Along the way, we passed a small group of Ring-necked Ducks. Below is an image of one of the ducks with its wings spread and flapping. Ducks fall into two categories, dabblers and divers, based on their feeding behavior. Ring-necked Ducks are diving ducks, and after several dives, they raise up and flap their wings to shake off water from the dive. 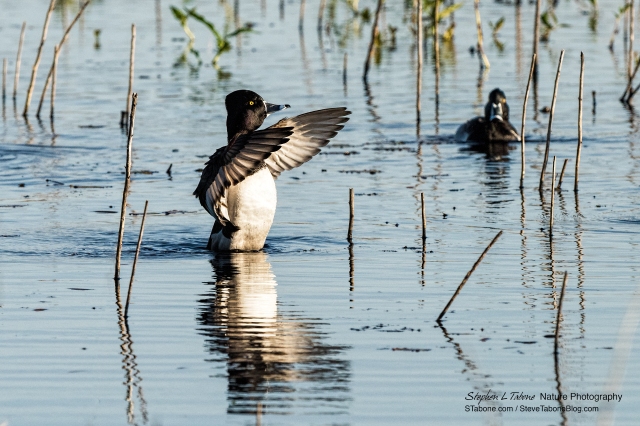 Although we saw and photographed many birds and some gators along the way to the viewing platform on the trail, the highlight was sunset and photographing the Sandhill Cranes as they flew onto the Prairie to roost for the evening. Below are two of those images–one with the cranes against the colorful and glowing sky, and the other a black and white image of a pair of crane silhouettes against the heavily clouded, early evening sky. 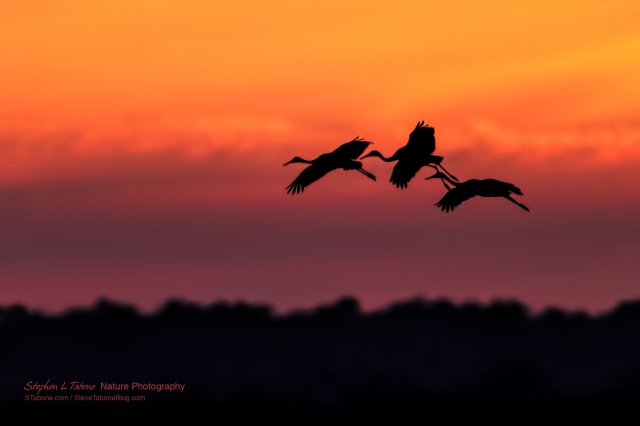 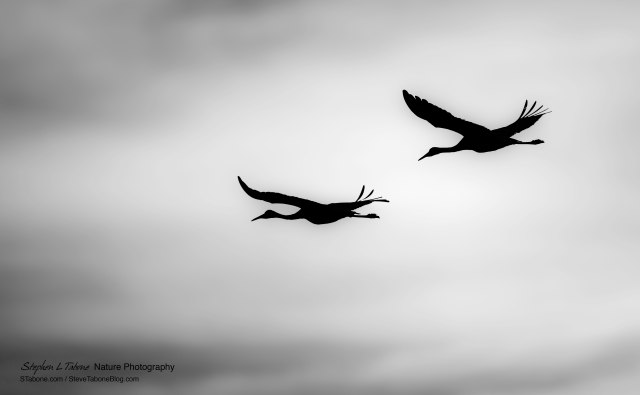 As I mentioned above, Ernie and I went to Cedar Key, which is about an hour and a half drive west from Gainesville. It is an old fishing village on the Gulf coast. Along the way, on a narrow stretch of two lane highway, I noticed an eagle on the side of the road eating some form carrion. I immediately pulled over and the eagle flew up into a nearby tree. We were able to get off a few shots before the eagle flew away. Below is one of the images. 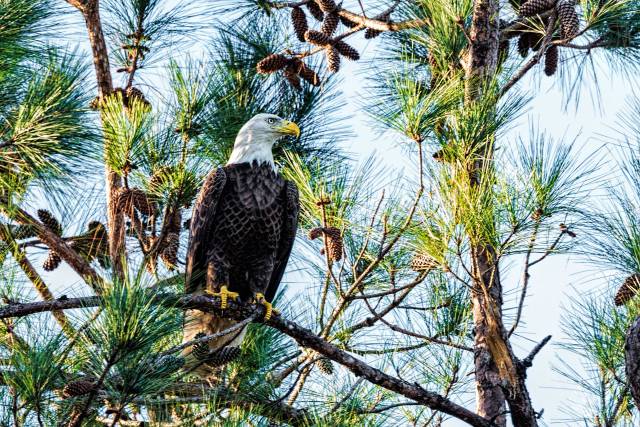