Sunrise on the Potomac River

This morning, I got up at 0500, loaded the car and went to Leesylvania State Park just a few miles from bed. I was hoping to photograph the sunrise across the Potomac River. As I was getting closer to the park, I could see a few clouds and color, so I sped up. Fortunately, the park gates were open because it was well before the park’s opening hours.

After entering the park, I drove to the last and furtherest parking lot, quickly exited the car and began unloading my gear and mounted my camera on a tripod. I also attached a handheld shutter release and checked the ISO and set the aperture and shutter speed. Then, I put on my backpack full of gear and hurried through the park to the shoreline.

I was the only person there, not even a fisherman in sight. They too arrive early, but not today. I set up my Nikon D700 with the 24-70mm 2.8, carefully composed the shot, focused and began shooting. The sky was beginning to glow in red, orange, and yellow colors. This was going to be a good morning for capturing an awesome, colorful sunrise.

Below are photos from my iPhone. I will process and upload the Nikon images later. This is an experiment–I am preparing this blog post on my iPhone while waiting for Angela at her therapist appointment. More on that later too. 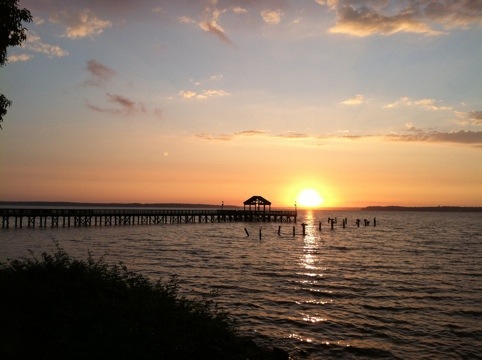 Retired Executive Consultant and Nature Photographer
View all posts by Stephen L Tabone →
This entry was posted in Uncategorized and tagged sunrise. Bookmark the permalink.

3 Responses to Sunrise on the Potomac River