Blue Spring State Park is over 2,600 acres and includes the largest spring to feed the St. Johns River. The spring run is the winter home to West Indian Manatees. On Saturday, there were 25 manatees present, swimming gracefully in the crystal clear water. In the opening image to this article, a lone manatee was swimming along the shoreline of the spring run. Manatees can grow to a length of 13 feet and weigh over 1,300 pounds. Above there are three manatees swimming below the water. 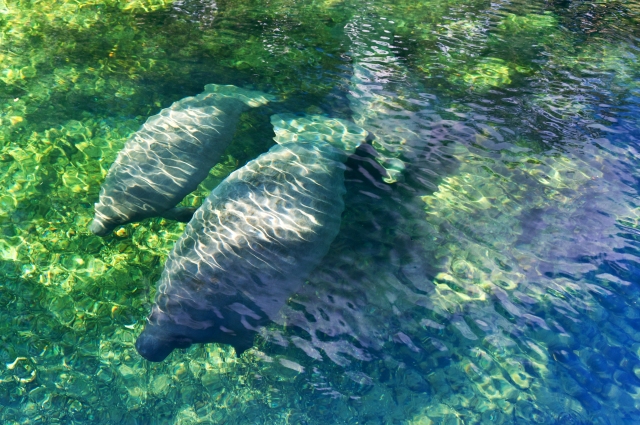 In mid-November, because the population of wintering manatees is high, the State Park closes a portion of the Blue Spring run to protect the manatees from boats and swimmers. The images in this article were taken in the closed area where the manatees swim right along the shoreline allowing for photographs such as the one above where I was practically looking straight down on them.

One of my favorite images is below where the three manatees (in the above image) swam by and then broke the surface. Someone nearby said the two smaller manatees were the young of the much larger female, and the younger ones were still nursing, which is why one of them is tucked under the female.

Above as the manatees snuggled, one of them stuck its entire face out of the water. The manatees surface every few minutes for air. In the below image, when coming up for air, this manatee blew water out of its nose before taking a breath. This did not happen often and was somewhat of a unique capture.

Below a group of four manatees swam by with one of them obviously very young and small staying very close to what is probably its mother.

The manatees were not alone in the spring. Just down the spring run from where I photographed the above images, there was an alligator sunning itself (below image). I also saw Blue Herons, Cormorants, many very large Alligator Gars and one Large Mouth Bass that was easily over 10 pounds. I have photographs of them and will be uploading them to my Website at http://stabone.com/p800471225

Obviously, it was a fantastic day for me and the manatees at Blue Spring. They seemed content, and I was thrilled to be able to see and capture them digitally.