I was on the “hunt” for waterfowl at Merritt Island National Wildlife Refuge in December–hunt to locate and photograph them, NOT to hunt them as hunters do. I was successful and hopefully the hunters were not. One of the types of waterfowl that I located and photographed was a small group of Northern Shovelers that were in the company of a very large group of Coots (well over a thousand).

Before I continue with my images and description of the shovelers, I want to share a disturbing article I read this morning about Sandhill Crane hunting in Kentucky. Yes, Sandhill Crane hunting! Apparently, Kentucky is the only eastern state to allow the hunting of Sandhill Cranes. The article, which can be found at this link: http://focusingonwildlife.com/news/a-win-for-the-cranes/, explains how Kentucky issued 400 hunting permits this year for Sandhill Cranes. Fortunately, only 50 were killed during the 30 day hunting period. I find it appalling that anyone could shoot and kill such a magnificent, helpless bird, or for that matter any bird.

Speaking of Sandhill Cranes, it is somewhat coincidental that yesterday I read an article written by a free lance travel writer for the Florida Rambler blog and Florida newspapers and magazines, who found my images on the Internet and contacted me for permission to use them in an article about Sandhill Cranes at Paynes Prairie Preserve State Park. Her article and my images can be seen at: http://floridarambler.com/florida-getaways/migrating-sandhill-cranes-central-florida/ 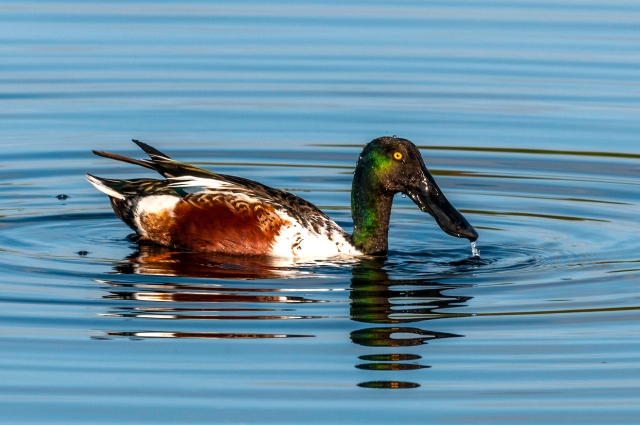 Northern Shovelers get their name because of their elongated spoon-shaped bills that are used to shovel through the mud and water for food. Their bills are highly evolved for this activity with comb-like projections along the edge of their bills to filter the food from the water. The males are beautiful ducks whose heads are a highly iridescent green, when the light strikes it at the right angle.

The female Northern Shovelers (below) are rather plain, as is the case for most female ducks. The female shoveler below had just popped up from the water and was shaking it off when I shot this image.

I am slowly working my way through my many images from Florida in December. Upcoming articles and images will be about Green Winged Teals, Blue Winged Teals, Wood Storks, Red-shouldered Hawks, Kingfishers, several types of herons and egrets, and alligators. Today, I would be out with my cameras, but it is overcast and lightly snowing, and so I am housebound. I am anxiously awaiting spring!