Late Saturday afternoon, I heard the distinct calls of a pair of Barred Owls in a heavily wooded area across the lake from my home. I have been wanting to find and photograph the owls since I first heard them there in the fall.  I set up my camera (Nikon D700 and 80-400mm lens, set the ISO at 1600 since the light was poor, and mounted it on a ballhead and monopod) and headed around the cove leading to Powell’s Creek and the wooded area, where the owl calls come from. Since this was more an exploratory venture, I did not take a tripod and a more powerful lens. I also did not know how deep into the wooded area I would need to go or how wet the shoreline would be since we recently had a lot of rain and much of the area by Powell’s Creek is a marsh.

Unfortunately, I could not find the owls. Instead, as I approached where Powell’s Creek empties into Lake Montclair, I saw the North American Beaver (below) that lives in the creek, and I was able to photograph some of its interesting and entertaining behavior. The beaver was reacting to several noisy kayakers that were in its “territory.” Beavers use their tail to slap the water to warn other beavers of danger, to get the attention of an intruder, or to drive away a predator. It is an excellent warning sound, because it can be loud and heard above and below the surface.

I have seen the beaver’s  tail slapping many times before, when I have kayaked up Powell’s Creek, but yesterday’s display was the most aggressive with the biggest splashes I have ever seen. Although the beaver was far across the lake from where I was standing, you can clearly see this behavior. In the first photo (below), the beaver’s back is clearly visible as it dove below the surface, which the beaver does just before slapping its tail on the surface of the water. 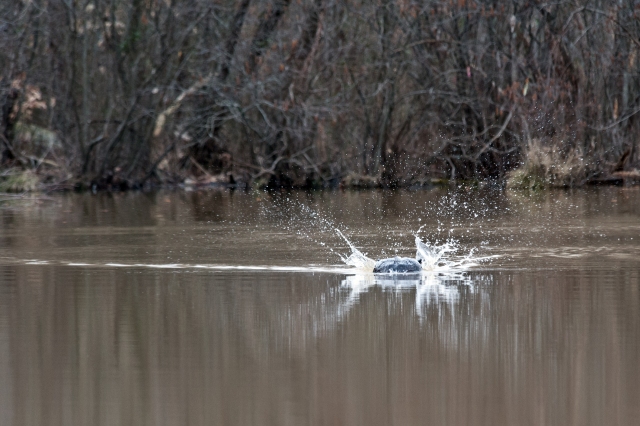 In the next image, as the beaver continued its dive, you can see its webbed feet in the air.

Below is the splash made when its tail slapped the water as the beaver completed its dive.

Although the beaver was doing its best to ward off the intruders (the kayakers), they eventually paddled off when they were ready.

As I walked back around the lake, I noticed and photographed a tree that the beaver was apparently in the process of cutting down. It is amazing how powerful their jaws and teeth are, enabling them to cut into a tree as large as this one (about 10 inches in diameter). 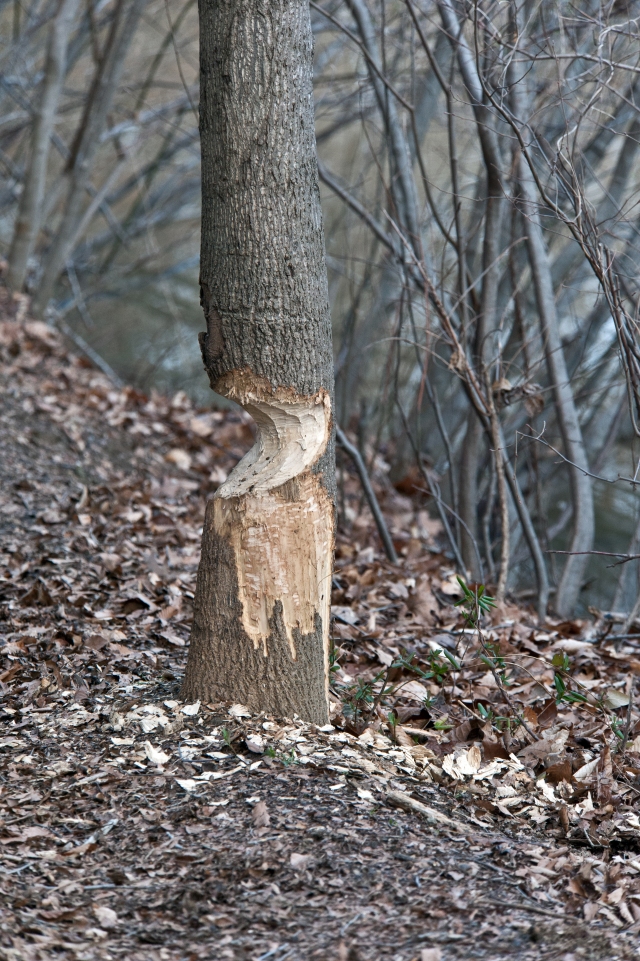 In closing, I want to share that my blog was recognized and included in the March edition of the South x Southeast Photomagazine. See this link: http://www.sxsemagazine.com/current-issue/columns/blogs.html for the specific page in the magazine referring to my blog and the article I wrote on Roseate Spoonbills.