Before beginning this article, I want to share my excitement for reaching a blog milestone. As of today, I have had over 25,000 views on my blog in just a little over a year with more than 100 views daily in recent months. My blog has provided a means for sharing my love for nature and photography with many people around the country and the world. Hopefully, it inspires you to appreciate even more the natural beauty that surrounds us, but is often not seen due to our very busy lives. I am in Maine, having arrived on Thursday last week, and am absolutely loving it. Maine is a nature lover’s and photographer’s dream. I arrived in Portland last Thursday after a ten hour, uneventful drive. After two days in Portland, I drove along Maine’s coast to Mount Desert Island, where Acadia National Park is located. I am staying on the quiet side of the island in a cottage on the Atlantic.

No more than ten minutes from my cottage is the Bass Harbor Head Lighthouse (above image) that I photographed during last evening’s sunset. The lighthouse was built in 1858 and stands 58 feet above the mean high waterline. The tide fluctuates 10 feet here, making for some very interesting sights during low tide. It was a bit treacherous getting the image of the lighthouse, having to climb over and around a lot of small and large rocks, like those in the photo. 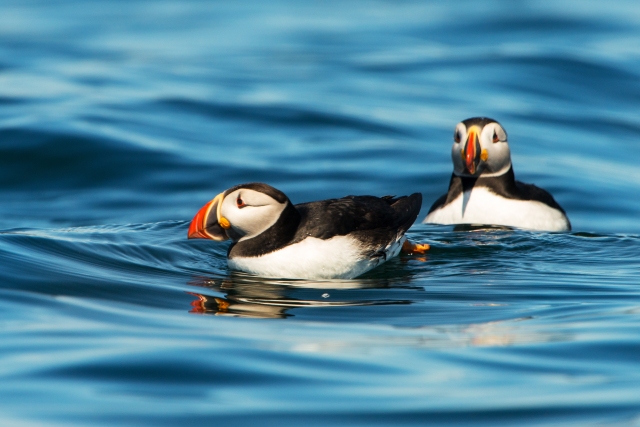 One of my photography goals for this trip was to photograph puffins, and on Monday, I chartered a boat to take me to Petit Manan Island, a small island that is part of the Maine Coastal Islands National Wildlife Refuge. Petit Manan has a small puffin and seabird colony during the spring breeding season. It was a perfect day to be on the Atlantic and for photographing the puffins. However, it was very challenging to photograph the very active puffins that were constantly moving and bobbing up and down in the ocean waters, while the boat too was moving up and down. We also could not get too close to the puffins or the island, because they are protected, and the island is a refuge. Nevertheless, I managed to get some good images, one of which is above.

The remainder of this article is devoted to a bird that I also had hoped to see and photograph while in Maine, the Common Loon. While photographing three young Peregrine Falcons in a nest at Echo Lake in the park, I was told about a loon that was sitting on a nest at Upper Hadlock Pond, also in the park. So yesterday afternoon, I hiked along the pond for what felt like many miles, since I was backpacking my 600mm lens and other camera gear if I was fortunate enough to locate the nesting loon, and I did find the loon sitting on her nest. Below are several images of the Common Loon on her nest. In the final image, when the loon stood up briefly to rearrange her eggs, one of the eggs can bee seen in the image. 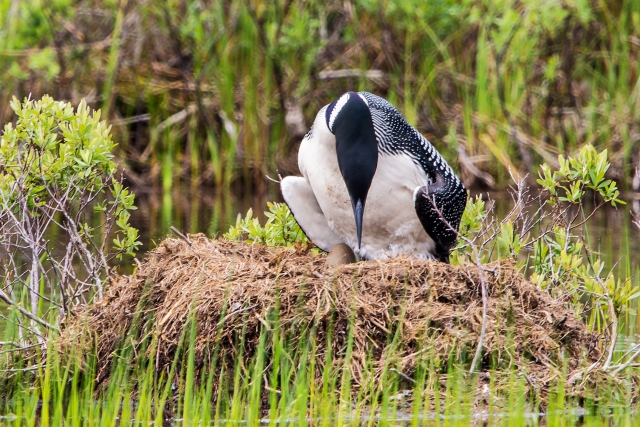 This morning, I went back to Echo Lake to photograph the young Peregrine Falcons, which I will do until they fledge, or I leave the island. While there, a Common Loon landed on the lake, and below are two images of this loon. Common Loons swim underwater to catch fish, propelling themselves with their large webbed feet (as seen in the second image). They swallow most of their prey underwater. Loons have sharp, rearward-pointing projections on the roof of their mouth and tongue that help keep a firm hold on slippery fish.

I also will be checking the nesting loon over the next week to see if I can photograph its hatchlings. Loons are known to swim around with their young on their back, and if I am lucky enough to be able to photograph them, I will include an image in a future article.

In between continuing to explore Mount Desert Island and Acadia National Park, I will be reviewing and processing more of my images from here and post them in future blog articles. I have taken many landscape and seascape photographs and will devote my next article to them.