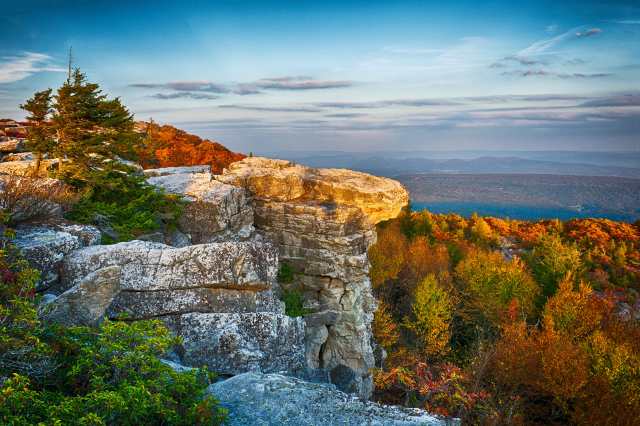 Three weeks ago, I spent a long weekend (Friday – Monday) in Canaan Valley, West Virginia, with two friends, who also are avid photographers. After about a 4 hour drive from northern Virginia, through area after area of peaked fall colors, we arrived in time to register the RV, set it up, and get to the top of Dolly Sods for sunset. As you can see from the above and following images, our timing was perfect to capture the late afternoon sunlight illuminating the Dolly Sods Wilderness plateau and surrounding areas. 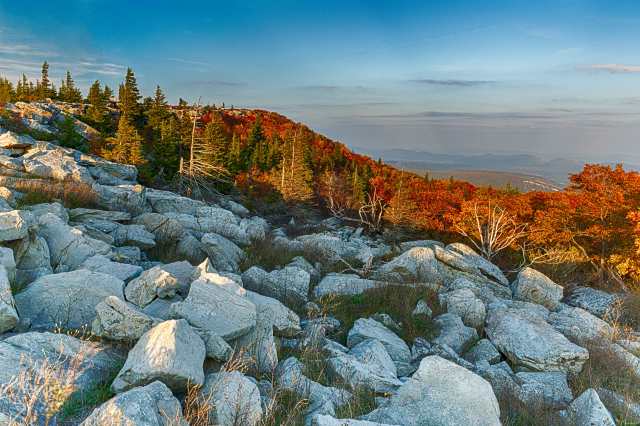 Dolly Sods is a rocky, high-altitude plateau, ranging from 2,700 to over 4,00o feet. It is located in  in the Allegheny Mountains of eastern West Virginia in the Monongahela National Forest. Dolly Sods Wilderness encompasses 17,371 acres within over 32,000 acres of forest. When on the highest elevations of the plateau, there are wide sweeping views of the mountains to the east. The views are breathtaking and sunrises can be spectacular, depending on the weather and cloud cover. 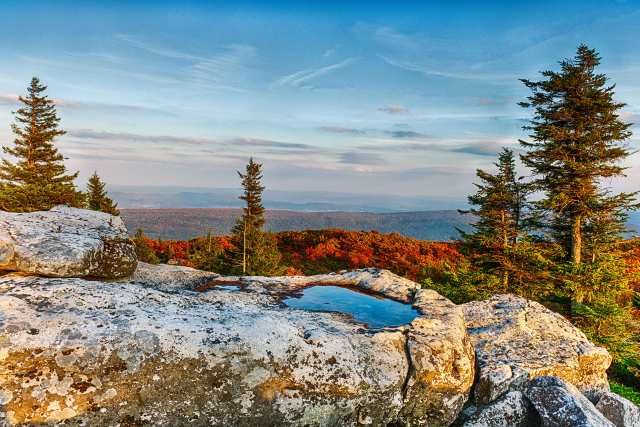 Dolly Sods also has unusual landscapes. The landscape of the plateau is typically found in Canada with stunted red spruce trees, wind carved boulders and cliffs, heath barrens, and grassy meadows from years of logging and fires. Considering the devastating history of the area, the beauty is even more amazing.

There was enough time to shoot east to capture the sun lighting up the fall colored trees and mountain ridge lines, before turning toward the setting sun.

The sunset was spectacular. Unfortunately, Dolly Sods must be directly under the flight path for aircraft from the DC area heading west, because there were contrails everywhere in the sky. 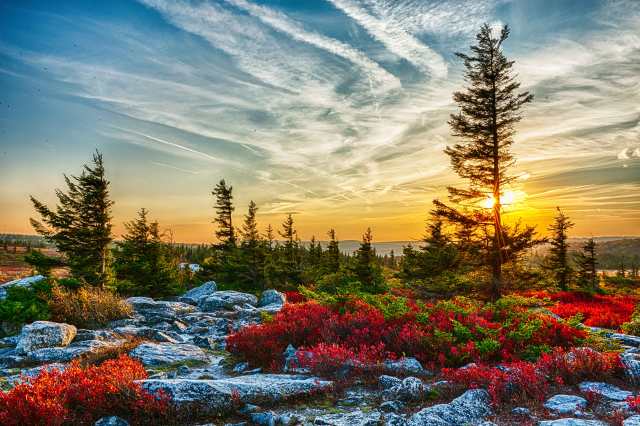 When the sun gets close to the horizon (one or two sun-widths), it sinks quickly, requiring attaining the right location within a couple minutes of sunset. I hurriedly worked my way through a heath barren of waist to shoulder-high huckleberry, rhododendron, and cranberry plants to get to a location that would be composed of some of the plants, trees, and of course, the setting sun. It turned out to be a good location. The sunset was incredible.

The next morning, we were on Bear Rocks on Dolly Sods plateau before sunrise. Bear Rocks is located on the eastern edge of the plateau, overlooking the Shenandoah Valley, and the Shenandoah Mountains in the distance. The wind was blowing and gusting around 30 mph (guestimate), and it was in the 40s (another questimate), but watching the horizon begin to glow and seeing the sun quickly rise and disappear in the colorful clouds was worth the challenge of getting and being there–I do not have the words to do it justice. The below images captured some of the beauty.

As you can see, views from Dolly Sods are spectacular, but they also can easily be very different, with a thick cloud cover and rain.  That is how our next visit was, heavily overcast/cloudy, and raining on and off. Nevertheless, it still looked amazing, but it was either wet or not well lit. I still enjoyed being there. Below is a panoramic image comprised of 7 images taken from a rock outcropping and looking east toward the Shenandoah Valley.

The next morning, we went to Elekala Falls. The weather was perfect for shooting the falls, overcast and occasional light rain. I was wearing knee-high boots and able to walk through the water to shoot the falls from many angles. Elekala Falls are beautiful, with its high rock walls, moss and leaf covered rocks and boulders, and swirling pools of water. Below are three photos of Elekala Falls. According to one American Indian tale, the falls are named after an Indian princess that threw herself over the falls. 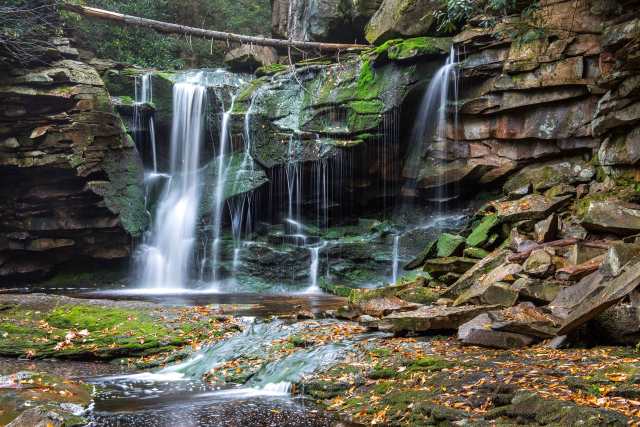 Another highlight of the trip was Blackwater Falls. The Blackwater River flows over the falls, dropping 62 feet. The flow over the falls was very light that day, as compared to when the river is raging. We may not have had a raging river, but we had fall colors surrounding the river and falls. Simply gorgeous.

I went to Blackwater Falls last year in the winter, when the falls were frozen. It was very challenging getting to them in the snow and ice, but it was worth it. 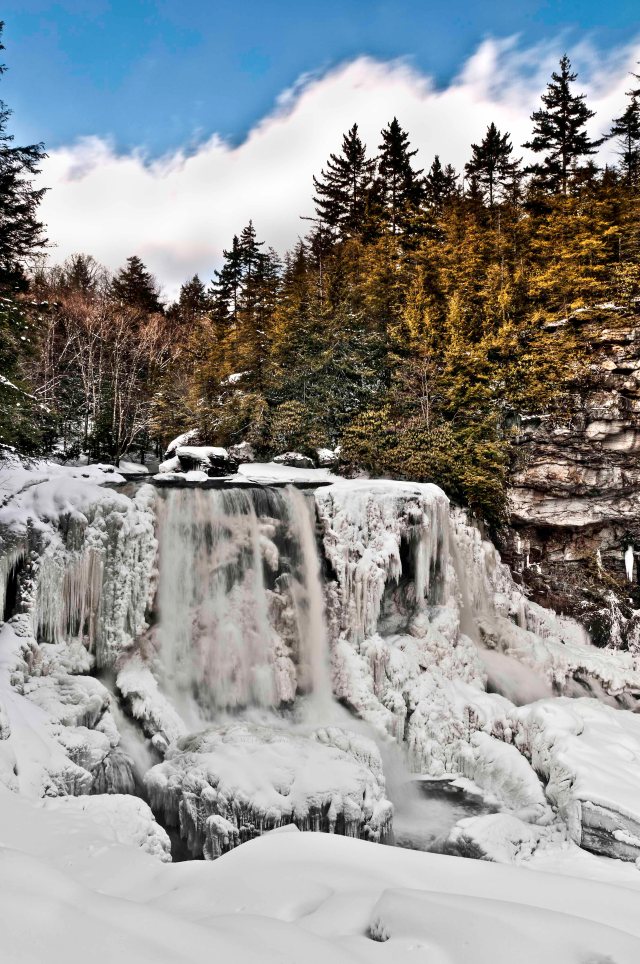 The final two images…for those of you still reading…were taken in Canaan Valley Wildlife Refuge in an area with wetlands and beavers. In the first image below, the beaver lodge, which was very large, is on the left. We did see an adult and young beaver, but we had just packed up our gear and were leaving, when they appeared. They knew that.

Above is the sun setting at the beaver pond, as we were leaving.

I have been reviewing and processing my eagle images from last weekend. It was also a good trip and will be the subject of another blog article. If you would like to see those images, as well as others recently taken at Conowingo Dam, they can be seen at:  http://stabone.com/p922753828