The Barred Owls Are Back 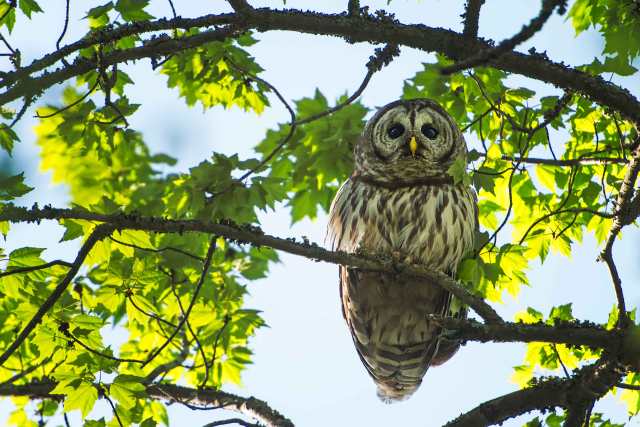 In late April, I kayaked across the lake and up the tree lined creek that flows into the lake where I live in northern Virginia. Far up the creek is where I located a pair of Barred Owls last spring, and where I had recently been hearing them again this spring. Therefore, I knew they were back. The question was whether I would be able to locate them again. Last year, the owls were in an area near the creek that is heavily wooded with very large trees and a heavy under growth. Much of the area around the creek also is a wet floodplain with pools of water and small streams leading to and from the creek.

Barred Owls  are common in North America and have adapted well to living near suburban areas, however, they prefer hardwood forests near wetlands. Barred Owls do not migrate, and typically live within a 5 – 6 mile radius. Apparently, this pair of owls nest in the same location each spring and then move to other areas for the rest of the year, because it is only during late winter and spring that I hear them across the lake.

As you can see from the images in this article, I was successful in seeing and photographing the pair of Barred Owls. The first two images (above) were photographed in April. That was an exploratory trip to see if I could locate the owls, but last Sunday, I was better equipped and prepared to stay on the creek longer. On this trip, knowing the trees were fully leafed out and that there would be a lot of shade covering the owls, if and when I found them, I brought along and used a Nikon SB900 Speedlight (flash) and a Better Beamer attached to it. A Better Beamer extends and focuses the light further for photographing wildlife at long distances with low light.

On Sunday, as I paddled up the creek, I was constantly looking into the tall trees for an owl silhouette. That is about the only way to spot them, if they are not moving, since they are so well camouflaged and blend into their environment. As I was scanning deep in the woods, I noticed one of the owls sleeping in a tree right alongside the creek and only up about 25 feet. The owl was backlit, well shaded, and its details barely visible. I slowly and quietly paddled back and away from the owl and set up my camera, which was in a water tight bag. After setting it up to include the speed light and Better Beamer, I began photographing the owl. Above is one of the first images I captured. Notice how the owl is leaning against the tree while sleeping. That is a sight I had not seen before. 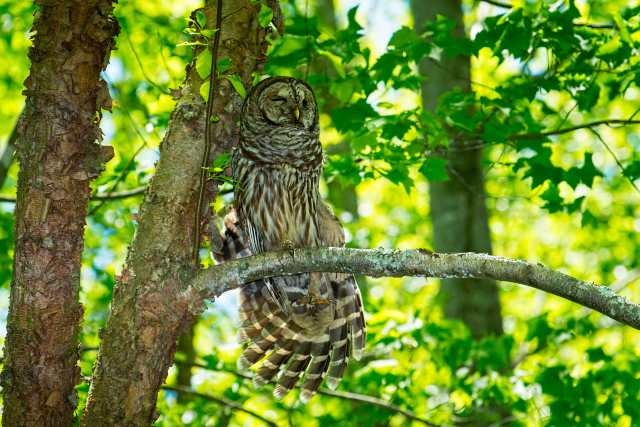 Eventually, the owl was awakened by the flash, but not startled. It slowly woke up, stretching its wing and leg (above image). The owl then looked up the creek and called out loudly, and the other owl called back. I tried to locate it, but it was out of sight. The owl I was watching began to move on the branch (next two images), as the two owls called back and forth to each other.

The owls appear to be nesting in the same tree cavity that I saw and photographed last year when the female was sitting on the nest. Since it was May, and I could not see any owlets, I suspect that the female owl had laid her eggs, which could hatch at any time. Barred Owl eggs hatch in about 4 weeks after they are laid. 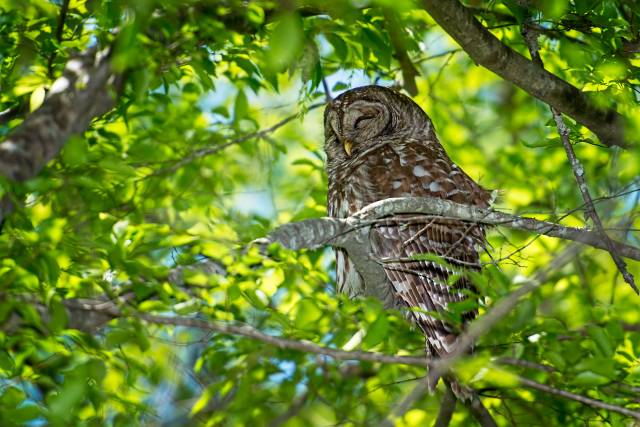 Before long, the Barred Owl took off and flew deep into the woods, and the other owl flew out from where it was hiding and perched on the other side of a nearby tree.  I was barely able to get a clear shot, which I took (above). After that shot, it was time to leave the owls and not disturb them anymore. They clearly wanted to sleep and get their rest, since it is predominantly at night when they are active and hunt for food.

The images in this article were photographed with a Nikon D800 and Nikon 70-200mm lens with a TC20 teleconverter, and as stated above, with a Nikon Speedlight and Better Beamer.

7 Responses to The Barred Owls Are Back