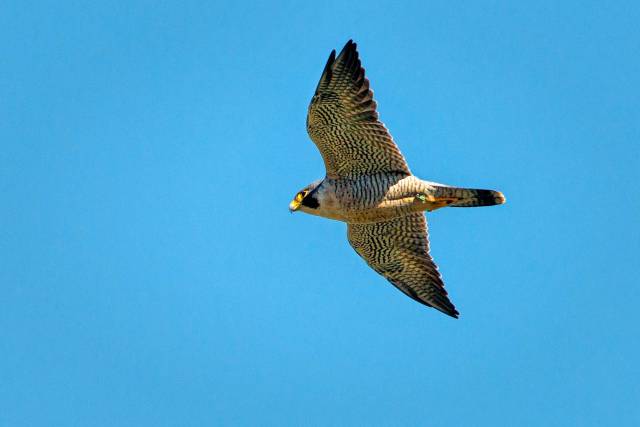 Two weeks ago at Conowingo Dam in northern Maryland, while photographing eagles, a Peregrine Falcon flew very quickly in front of me and my camera, and I was able to capture the above image. I have seen Peregrine Falcons before and tried photographing them, but they were too far away or flying too fast to get a decent image. This one is not bad, not perfect, but worth sharing.

Peregrin Falcons are the fastest flying birds and fastest member of the animal kingdom, diving to catch their prey at speeds over 200 mph. They feed almost exclusively on birds. The Peregrine Falcon became an endangered species in many areas because of the widespread use of pesticides, especially DDT. The Peregrine Falcon has made an excellent recovery since the ban on DDT and protection of their nesting places.

If you look closely (click on the image), you can see that this falcon is banded with a green identification band. Green bands have been used on Peregrin Falcons in Virginia since 2000. If you would like to read more about the banding of Peregrine Falcons, go to this website http://www.ccbbirds.org/what-we-do/research/species-of-concern/peregrine-falcon/report-sightings/