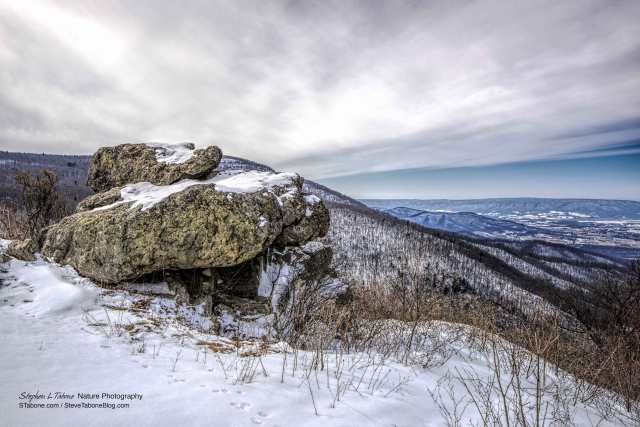 Yesterday, after dropping my son-in-law off at Massanuttan Resort to go snowboarding, I spent the day in Shenandoah National Park, exploring and looking for either wildlife or an eye-catching view that I could make into a “keeper” landscape image. I only briefly saw a few small birds and heard a Barred Owl in the distance. It turned out not to be a good day for photographing wildlife.

Since it snowed earlier in the week, I hoped to capture an image of the snow on top of the mountains with a view of the snow below in Shenandoah Valley. I searched for a couple of hours until I found what I was looking for, as shown in the opening image. I located a group of large boulders covered and surrounded by snow at the top of a mountain with a clear view of the valley below. And, Mother Nature/the weather was cooperating. It was 22 degrees, and fortunately, the wind was not blowing, keeping everything still. To further enhance the image, a weather front was passing through, providing an interesting semi-clouded and blue sky.

One way to make a landscape image interesting and to give it depth is to photograph something in the foreground, while capturing the overall landscape in the background. As you can see in the above and below images, I moved to different locations around the group of boulders to capture different perspectives. Below are two different views. 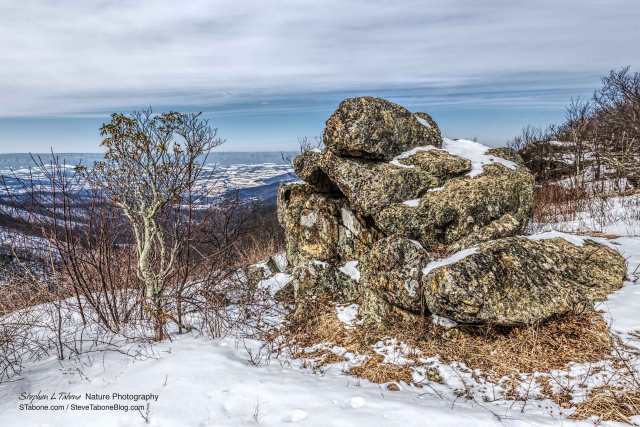 Although I like the two above images, the opening image is my favorite. I like that the boulders are off-center, and that the clouds, blue sky and terrain provide leading lines to the subject of the image.

In the second image, although also appealing, the boulders are in the middle of the frame. From a photographers perspective, I try to avoid placing the subject in the center. In the third image, I included a small tree to the left of the boulders, which adds interest to the image. However, the tree blocks the view of the valley.

The images were photographed with a Nikon D810 and 16-35mm wide angle lens. The detail captured by the D810 is incredible. I suggest clicking on the images to see them in full screen mode.

I included the above image as an example of the need to have something of interest in the foreground of a landscape image. Although this image is interesting, showing an unobstructed view down the snow covered slopes of the mountains to the distant valley, it is not as appealing as the above images with the boulders.

Below is an image of Mary’s Rock Tunnel in Shenandoah National Park.  It is the only tunnel in the park and was excavated through solid granite in 1932. It is considered one of the engineering feats of Skyline Drive. I have always enjoyed seeing and driving through the tunnel. I just had to stop and photograph it as I was leaving the park to pick up my son-in-law at Massanuttan.

Comments on this article are appreciated and can be entered by clicking on “Comments” found below the Share this: section. You can also read other’s comments there.