Early Saturday morning, March 26, 2016, my friend, Ernie Sears, and I went to a location along the Potomac River to photograph and video an active American Bald Eagles’ nest. The location of the nest is fortunately not well known, and we would not have found it if it was not recommended to us by a friend, Geoffrey Green. Based on Geoff’s directions, we were easily able to locate the nest, and when we arrived, one of the eagles was sitting on the nest. One of the advantages of this eagles’ nest is that it is located at eye-level, enabling photographing into the nest, instead of shooting from below the nest, which most often is the case.

After a short while, the eagle flew from the nest and perched on a nearby limb where it could keep a close eye on the nest and the two very young, newly hatched eaglets. While we were there, the other eagle returned, and they switched roles. The other eagle stayed on the nest, while the other one went in search of food, most likely a fish, for their hungry eaglets.

As the eagle waited for its mate to return, I was able to capture an image of the eagle with one of its eaglets. (below image) 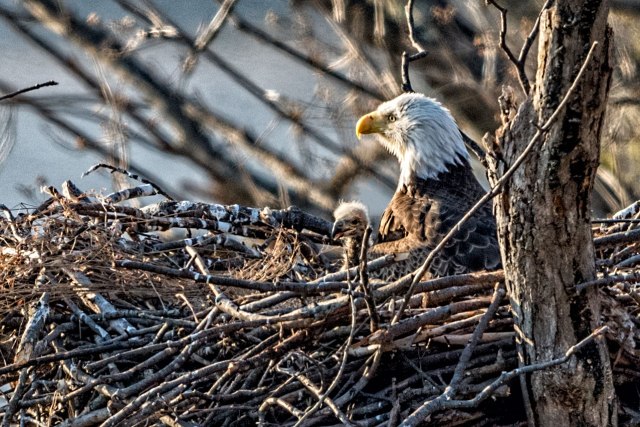 I returned on Sunday, Easter morning, with my wife after church for a brief visit to show her the nest and eagles, and to try a different camera. I am glad that I returned with the different camera. On Saturday, I used my Nikon D810 with a 600mm Nikon lens, but on Sunday I used a Nikon 1 V3 with the 600mm lens. The Nikon 1 V3 has a much smaller sensor with a 2.7 crop factor, and when used on the 600mm lens, it had the equivalent of 1620mm lens providing more reach for the distant nest. The nest is a little more than 290 feet from where I could get a clear shot of it, as seen from the below image. If you look closely, you can see the nest just above the center of the frame.

Below are two images taken with the Nikon 1 V3. On Sunday, the sky was heavily overcast, providing filtered light, which was better light to photograph the eagles. The filtered light eliminated shadows and reduced the difficulty of not capturing detail in the eagle’s brightly lit white feathers. 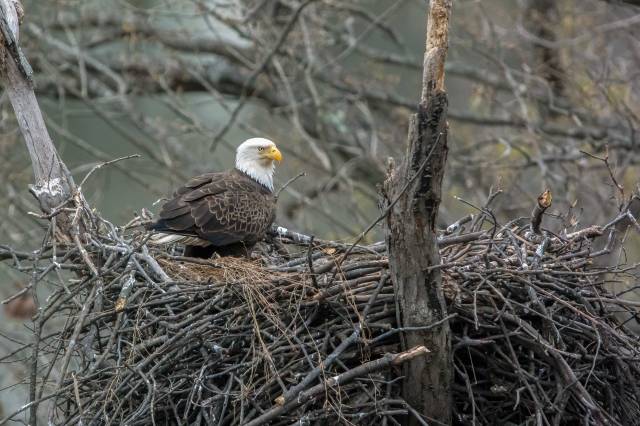 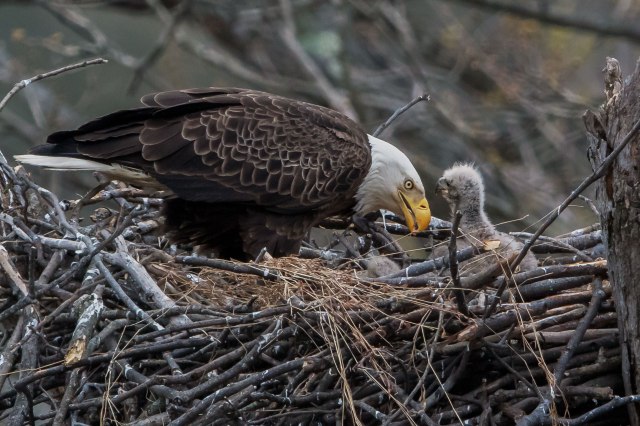 Eagle feeding one of its eaglets.

In the second image, the eagle can be seen feeding one of the eaglets. I also videoed the eagles and have several videos of the eagle feeding the two eaglets. I will post the videos tomorrow in another article.

I plan to return to this (secret) location to continue photographing and videoing the eaglets as they mature and eventually fledge from their nest. If you are not following my blog, I recommend that you click on the above “Sign me up!” button so that you can monitor the growth of the eaglets.