Most people, and probably many of you who read my blog, do not like snakes. However, I do not feel the same way and, therefore, was excited when my wife, Angela, found an Eastern Ribbon Snake and called it to my attention, while we were visiting the Virginia Arboretum near Winchester, VA,  At that time, I was shooting landscapes, but quickly changed lenses putting on my 105mm macro lens to photograph the snake.

The Ribbon Snake was about 24 inches long and very cooperative, letting me get in close. We noticed its very bright, red tongue quickly moving in and out of its mouth as it was sensing my presence. It was a challenge to photograph it while its tongue was out, but I did have some success. The snake tried to strike or bite me several times while I was in close, but it was not successful. That made for more excitement.

Below is a closeup clearly showing the Ribbon Snake’s attractive face and red tongue. 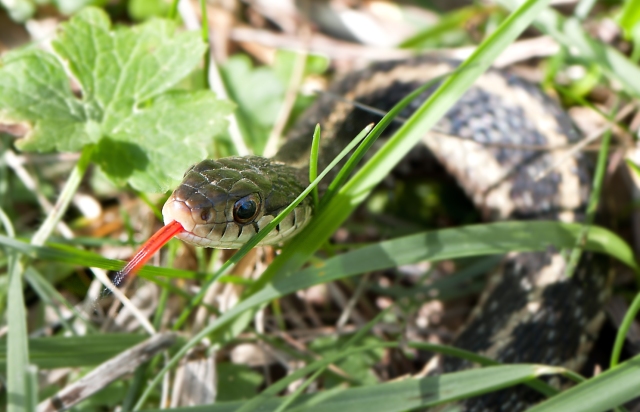 The Eastern Ribbon Snake gets its name from its very thin black body with yellow stripes, one on each side. They are found in the Northeastern United States and Southeastern Canada, and can usually be spotted in wetlands and near the edges of ponds and streams. They are comfortable both in and out of water and are adapted to both environments.

When Eastern Ribbon Snakes are frightened, they take to the water or bushes. There was neither nearby, so this one just curled up and posed for me.