I visited Paynes Prairie Preserve State Park several times while in Florida in December. One of the best things about the Prairie is that you never know what wildlife you are going to encounter. There are wild bison, horses and hogs, alligators, deer, and numerous species of fish, reptiles, amphibians, birds and other mammals, and fabulous landscapes.

Paynes Prairie can be very wet (even flooded) and, at other times, very dry. For the last two years, the Gainesville area has been suffering from a severe drought, and that is where Paynes Prairie is located. When the Prairie’s wetlands are wet, they are teaming with wildlife, but when they are dry, the wildlife is sparse in comparison. However, even when sparse, there is plenty to be seen (and photographed), if one takes the time to look. Over several visits and many hours at the Prairie, I saw and photographed a wide variety of wildlife.

The images in this article were made on my first visit to the Prairie in mid-December and are limited to three exciting moments when I saw and was able to photograph a Northern Harrier (opening image), a Sharp Shinned Hawk and an American Kestrel (both below). As I continue to review and process more images of other birds and wildlife from the Prairie, I will include them in future blog articles.

Below is a Sharp-shinned Hawk perching on top of an old, dead tree stump. These hawks surprise and capture their prey, small birds, while flying quickly through dense vegetation, which can be hazardous to their health. This hawk may have suffered the ruffled breast feathers while chasing its prey. (Click on the images to zoom in closer.)(Double click on the hawk’s eye.) 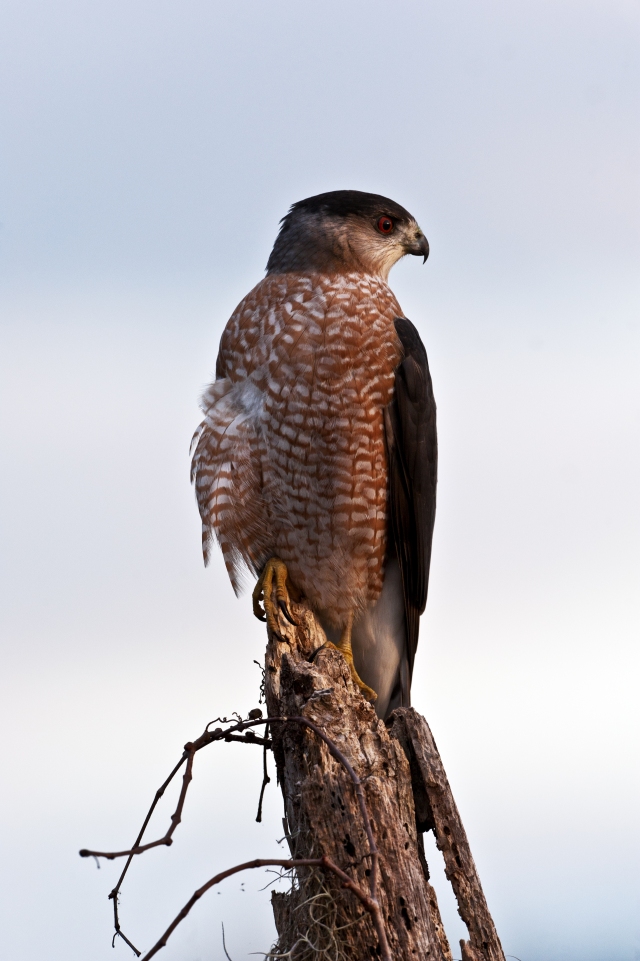 Below is an American Kestrel. I could have cropped this image down to show more of the Kestrel, but I love the background, its colors and 3D effect, and also like how the background colors compliment those of the Kestrel. And of course, the afternoon sunlight was beautiful on the Armaranth plant where the Kestrel was perched. Kestrels are falcons and are easily identified by their hunting behavior, which is to hover at a height of around 30–60 ft over open country and swoop down on prey, usually small mammals, lizards or large insects. This Kestrel dove to the ground and then flew up into the Armaranth (without a catch), where it posed for me.

As I was leaving the Prairie, the sun was setting, and after locating an unobstructed view, I stopped to watch and photograph the sunset. This sunset was not one of the spectacular ones, but it was a bit unusual because of openings in the heavy dark clouds that allowed the sun’s golden light to streak down to the ground.