Last weekend, I drove to Bombay Hook National Wildlife Refuge.  When I arrived late in the afternoon, I saw a large gaggle of Snow Geese in a field, and as I was pulling to a stop, I saw a fox running along the edge of the gaggle of geese. I quickly stopped the car and went for my camera gear in the back, but the fox had the geese on the move, and they began to fly away. Unfortunately, the fox ran into to a wooded area and out of sight. I did manage to take a few photographs of some of the Snow Geese (above) that did not immediately take flight and some photographs (below) as they flew away. 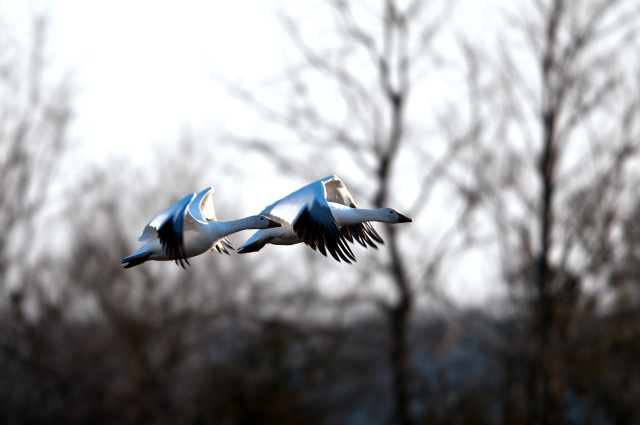 After the Snow Geese were gone, I worked my way around the refuge looking for other wildlife, but by that time the sun was beginning to set, and the light was not good for photographing the ducks and other birds that I saw. So instead, I focused my attention on photographing the sunset.

Unfortunately, the sky was clear, and although the setting sun turned it into beautiful shades of yellow and orange, it was not going to be a spectacular sunset. Nevertheless, I was determined to try to capture a good image and waited for the sun to drop into the tree line across a pond resulting in the below image. Clearly, some sunsets are much more beautiful than others, but regardless, it’s always great just to be outdoors in a natural environment and see any sunset. If you click on the below image and fill your screen, the setting sun behind the trees is more visible.

I returned to Bombay Hook the next morning before sunrise hoping to find the Snow Geese, but did not. So instead of photographing the geese, I concentrated on photographing the sunrise. Like the evening before, there were no clouds, and as the sun rose, the sky was again filled with gorgeous yellows and oranges. So, it was time to be creative. I remembered a small wooded area back up the road and quickly went there to capture the rising sun framed by the leafless winter trees. Below is one of those images.

The above image alone justified the 3 hour drive to Bombay Hook and getting up before the crack of dawn.

Later that morning and before leaving the refuge, I was able to photograph some of the other wildlife at Bombay Hook. Below are two Canada Geese as they took to the air.

Although I did not see any Snow Geese on the ponds or in fields at Bombay Hook that morning, occasionally a group of would fly overhead, like in the below image.

That morning, I also was able to photograph three different duck species: Northern Shovelers, Pintails and Buffleheads. Photographs of each follow. The first is a male (drake) Northern Shoveler and the second two images are of female (hen) shovelers. 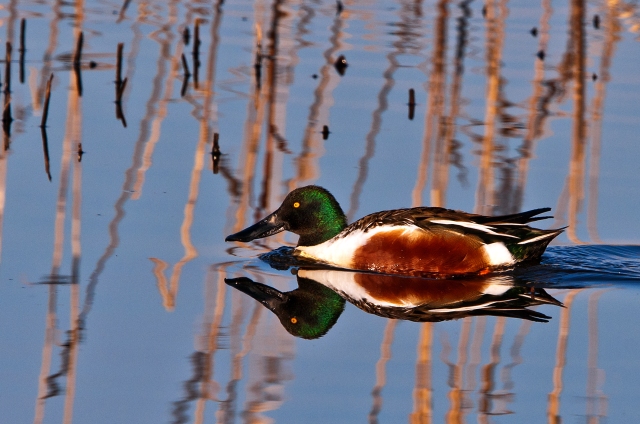 The below image is of a drake Northern Pintail duck. They get their name from their elongated, thin tail feathers. Northern Pintails are among the first ducks to migrate south in the fall and north in the spring. Most pintails breed in Alaska. 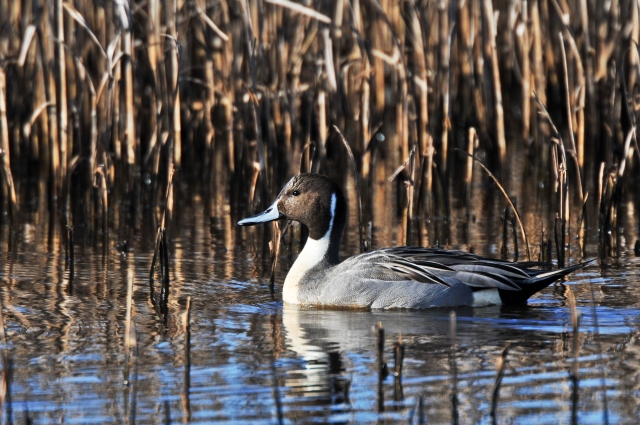 The following photographs are of a Bufflehead duck. Of all of the ducks I photographed at Bombay Hook, the Bufflehead was the most challenging to photograph because it seemed to be very wary of me, and there was only one Bufflehead. Fortunately, after flying away several times, it would return to look for more food in that same area of the pond.

Buffleheads are the smallest diving duck in North America. They breed in ponds and small lakes in Canada, and winter in much of the United States. Buffleheads nest in tree cavities, which they can do because of their small size.

This is my first year of seriously photographing waterfowl, and I have thoroughly enjoyed seeing and photographing them. I am looking forward to spring when many more ducks will be migrating through the Atlantic Flyway, which includes the many refuges I have been recently visiting in Delaware, Maryland and Virginia.

As you can tell by the above images, which are just a sample of the many I took last weekend, I had a very productive and enjoyable visit to Bombay Hook National Wildlife Refuge, but I was VERY disappointed and saddened by what I saw as I was leaving the refuge. In several locations, along the narrow road leading through open farm fields to the refuge, were large groups of Snow Geese decoys. At first, I thought they were Snow Geese feeding in the fields, which is what the geese do (i.e., they spend the night in the marshlands and ponds where they are safe from predators, and when the sun comes up in the morning, they fly to nearby fields to feed).

With this blog article in mind, I stopped to photograph some of the decoy spreads. From the air, the decoys apparently look like gaggles of geese feeding in the field and thereby attract passing geese into the gunsights of hunters waiting in their blinds.

I am not hunter. I prefer to “hunt” with my camera. After spending the day admiring these magnificent birds, it was heartbreaking to see how elaborately some people work to kill them and how close they hunt to the refuges where the geese are temporarily safe.