Before I begin this post, I want to share my excitement and thoughts about this blog. Tomorrow is March 1, and it was in March last year that I started it to share my passion for photography, as well as my love for being outdoors on a refuge, preserve or other natural area observing nature’s beautiful landscapes, seascapes and wildlife. After 102 posted articles, over 14,200 views, 391 comments, and today averaging over 1,800 monthly views, I am very pleased and excited by the number of you that follow and read my blog and take the time to leave comments and/or email me about my articles and photographs. It has evolved into my primary way of sharing my “adventures” and photography, and the significant level of readers, which has been steadily increasing, is inspirational and very rewarding. Thank you to all of you!  Now to this article about the Snow Geese that I saw and photographed this past Sunday. It was a breathtaking experience and one that I will never forget, and this blog provides a way to share that incredible day.

The trip to Prime Hook National Wildlife Refuge in Delaware started at 2:00 AM on Sunday morning, when my friend, Ceaser, and I drove over three hours to get there. When we arrived, it was still dark, which is the way we planned it. We had never been to Prime Hook, but I had heard from a friend that there were hundreds of thousands of Snow Geese there. Prime Hook NWR is on the Delaware Bay and consists of over 10,000 acres of freshwater and saltwater marshes and wetlands, grasslands, ponds, wooded areas, and a 7 mile long creek. It is well known as one of the best habitats along the Atlantic Coast for spring and fall migratory birds. It also is known for large flocks of wintering Snow Geese.

Prime Hook has several roads that lead into the refuge and that end at the Delaware Bay. We chose the road where I had heard the geese may be found. As we were driving along the narrow road with wetlands and ponds on both sides, the headlights from Ceasar’s SUV illuminated what appeared to be some Snow Geese. We stopped and I opened my window, and we heard the load squawking of the geese. From the sounds they were making we could tell there were a lot of geese, but we could not see them because it was a very dark morning–there was no moon in sight. We quickly began to set up our photography equipment, tripods, cameras, lenses, and shutter releases. It was cold and windy, but with our focus on photographing the geese, we could barely feel the frigid  weather.

As the first light appeared on the horizon, the Snow Geese became more and more visible, and our excitement grew. There were definitely thousands of them on both sides of the road with the ones on the north side of the road within 50 to 100 feet (above 3 images). The huge flock on the other side of the road was much further away. We increased the ISO settings on our cameras, and as soon as there was enough light, we began photographing the Snow Geese.

As the sun rose, we could see there were many thousands more geese further away, across the pond where we were located (above image). It was impossible to tell how many, but we knew there were more than we had seen at other refuges.

Snow Geese are medium-sized geese that breed on the arctic tundra. They are high-flying and travel in large, noisy flocks. They got their name because when they descend from great heights in swirling circles, they look like falling snow. Most are completely white except for the black feathers on the tips of their wings. Darker species used to be called Blue Geese, but they are now recognized as a dark form of Snow Geese. 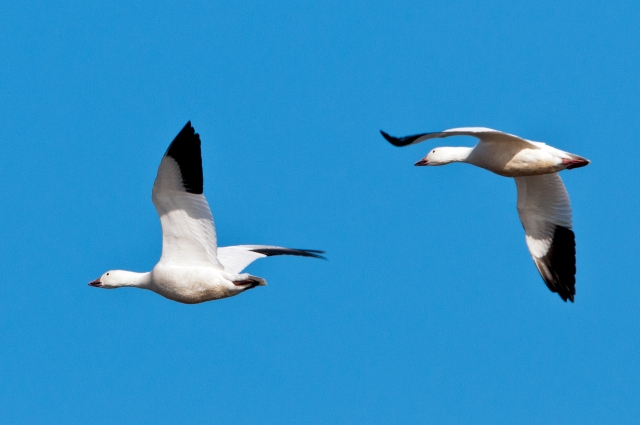 Above is the pond with a small number of the Snow Geese in view, but they were spread out in both directions. Below is a photo of a goose about to land in the pond.

As we were photographing the Snow Geese, the ones farthest away from us and across the pond began to “blast off,” which is the term used to describe when all of the flock takes off at one time. It was an incredible sight and sound–the sound of their wings flapping and sound of all of their squawking. It was an experience, as I said above, that I will never forget. Below are some images of the huge cloud of geese that kept getting larger and larger as they continued to lift off and fly away. It seemed to last for a very long time.

The above photo is my favorite, because the geese fully fill the frame, the light was perfect, the geese are sharp and clear, and the image is properly exposed with the right depth of field. I will be printing this image (large and on aluminum).

Below is a video that Ceasar took of the hundreds of thousands of Snow Geese as they blasted off and flew away. Click on the below image to start the video and be sure your sound is turned on. The quality of the video may not be perfect, but it allows you to see and hear more of what we experienced on that very special morning.

Again thank you for following my blog and keeping me inspired by your frequent visits, comments and emails. I will be posting another article later this week from the trip to Prime Hook to share the many other wildlife species we saw and photographed that day.