This evening when I arrived home, my wife told me that she saw two Canada Geese and their six goslings on the lake behind our home, Lake Montclair, Virginia. Canada Geese are very common on the lake. Many of the geese stay all year and do not migrate. I photographed a Canada Goose on a nest a couple of weeks ago, and these goslings are the first we have seen this year.

Canada Geese mate for life. They will take turns incubating the eggs on the nest, which takes about 28 days, but it is the female that spends most time on the nest while the male protects her and the nest. Shortly after hatching, the goslings are led to the water. As in the above image, the female usually leads the family with the male in the rear providing protection.

After hearing about the sighting, we decided to go down to the dock, me with my camera, to see if they were in the area, and within minutes, they appeared across the lake–what luck! I fired off a few shots (above), but they were on the move, as can be seen from the wake they were leaving behind them. 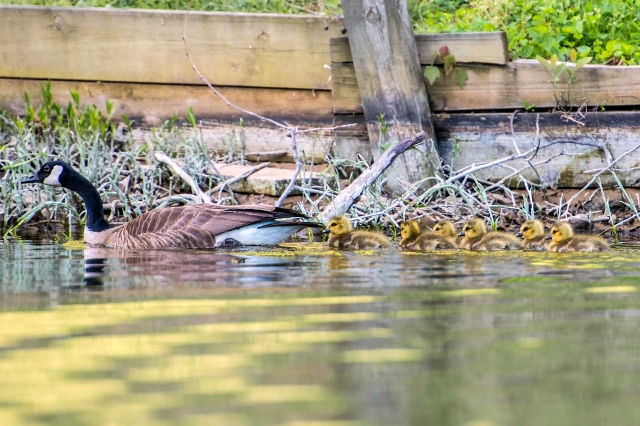 My kayak was on the dock, so I ran up to the house to get my paddle, put the kayak in the water and went in search of them. They had disappeared by the time I got into the water, but I caught up with them around the other side of the island. When I approached (above), they headed to the shoreline.

I followed them around the lake for about an hour trying to maintain some distance so as not to disturb them too much. Unfortunately, every time I got within a good shooting distance, they headed to the shore, out of the water and into the weeds and undergrowth along the shoreline. Therefore, I backed away, and they eventually returned to the water. This took place several times. Nevertheless, I managed to get a few decent images of the geese and their young. 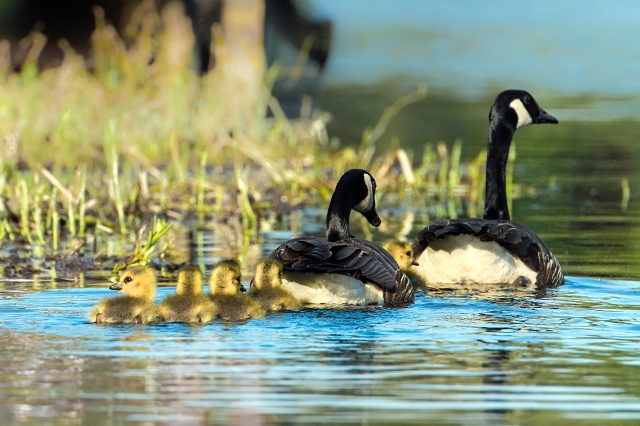 In the above image, the gosling on the end was keeping a close eye on me. Since Canada Geese are so common, they are not one of my favorite photography subjects, but their young are irresistibly cute.

The above image was taken at one of the times when they fled the water to hide on shore. They are safer in the water so they did not stay on land long–only long enough for me to move far away.