Merrimac Farm WMA consists of 300 acres, and the 15 Bluebird boxes are spread from one end of the wildlife area to the other. It takes a couple of hours or more to locate and inspect the nesting boxes, but it is very rewarding for many reasons to include just being outdoors in a natural environment with open fields and heavily wooded areas where other wildlife can be seen (and photographed).

I found more than half of the nesting boxes had some form of ongoing activity. However, there was one nesting box occupied by Chickadees. That box with a Chickadee at its entrance can be seen in the opening image (above).  When I opened the box to check its contents, I found 6 Chickadee eggs (below–this photo and the others that follow were taken with my iPhone). The Chickadee, as well as the Bluebirds that I saw, while checking their boxes, kept a close eye on me and were glad to see me leave. By the way, we do not remove Chickadee nests from the Bluebird boxes. 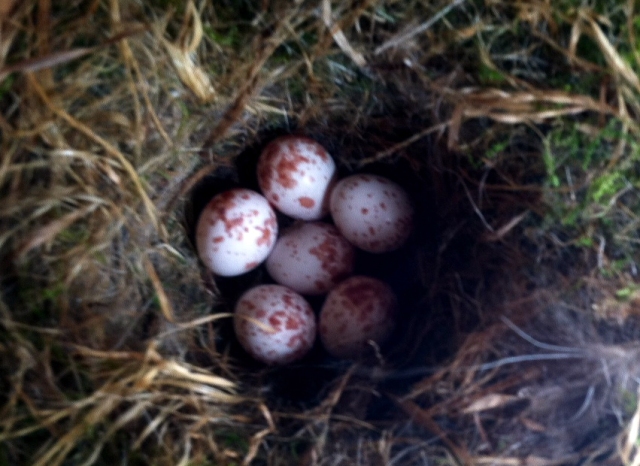 Below is a photo of one of the boxes containing Bluebird eggs. You can easily see the difference in size and color from those of the Chickadee. 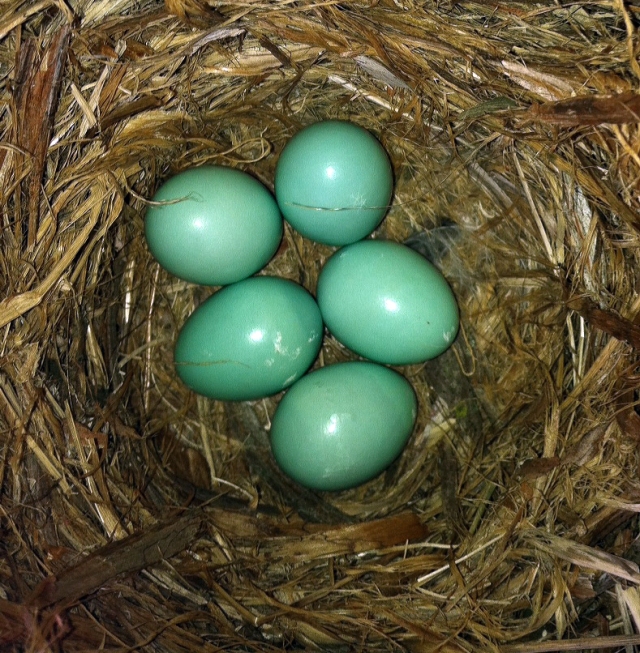 In most instances, when the nesting box is opened, it is not possible to see if the nest is occupied because of the height of the box from the ground. In order to see into the nest, I use my iPhone camera; however, most other volunteers use a mirror. Below is one of the nests after the box was opened. 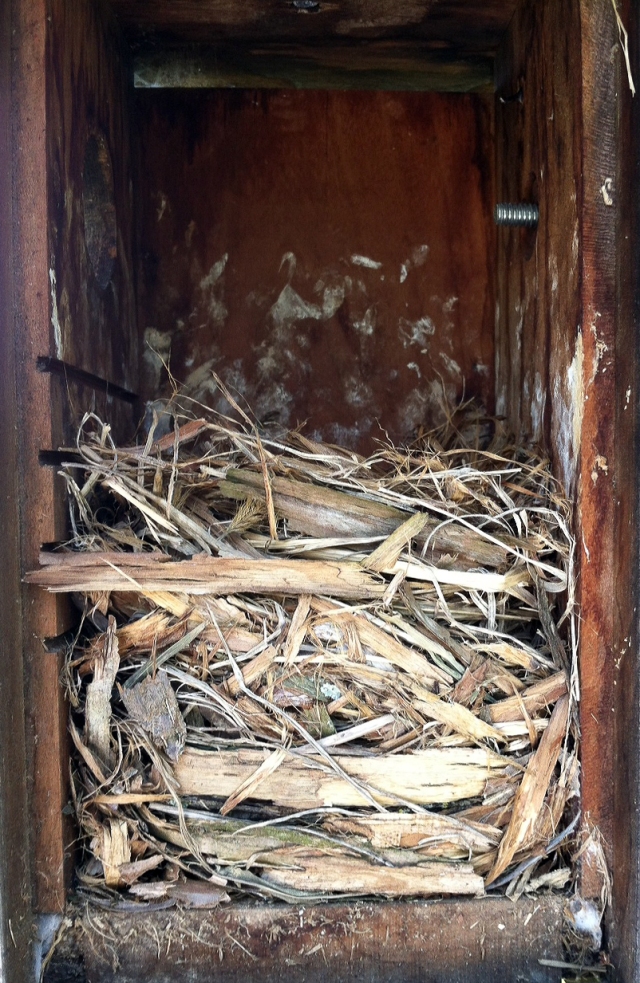 In the next photo, you can see a young bird’s eye looking at me after I opened the nesting box. Therefore, I quickly closed the box. As you can see, it is important to document the status of each nest and its contents so the next volunteer does not open a box with young birds that are about to fledge, thereby causing them to leave the nest too soon. Unfortunately, the volunteer program at Merrimac started late this year; therefore, I was documenting the status of the nests for the first time. Otherwise, this nesting box should not have been opened until after the fledglings had left the nest. 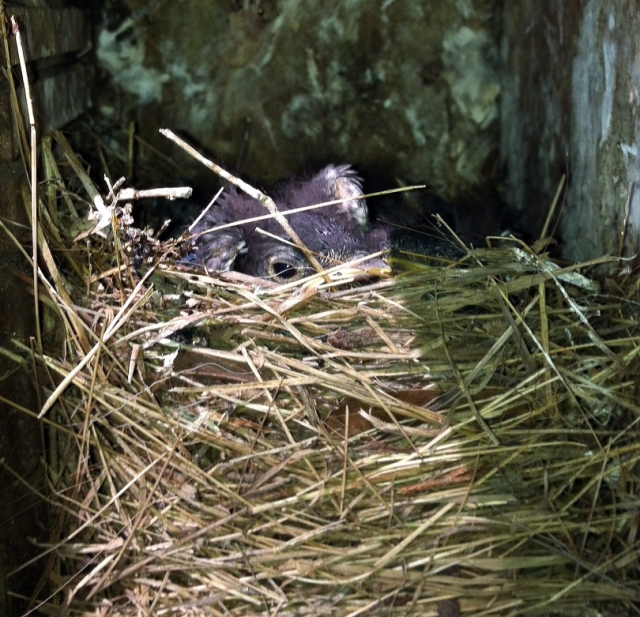 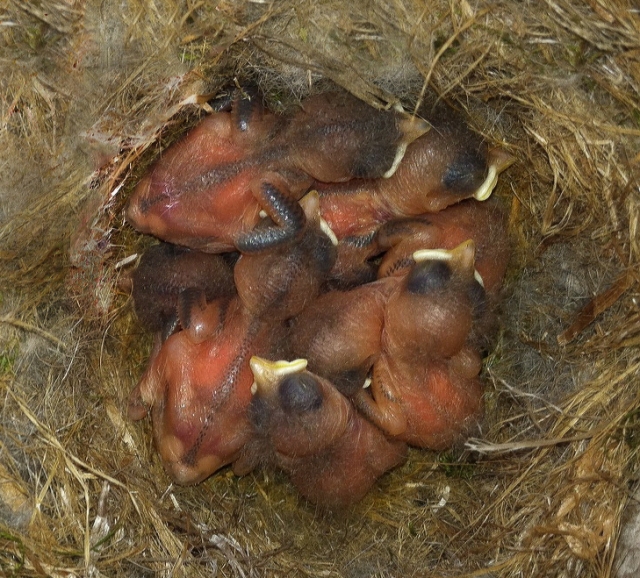 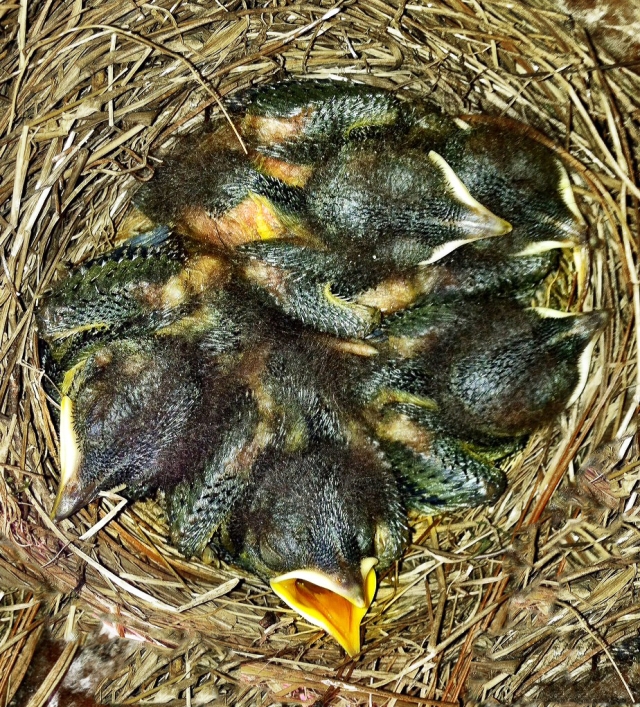 Bluebirds leave the nest between 17-21 days after hatching. The nesting boxes are cleaned out after the fledglings leave the nest. Eastern Bluebirds often have two broods of young each year. 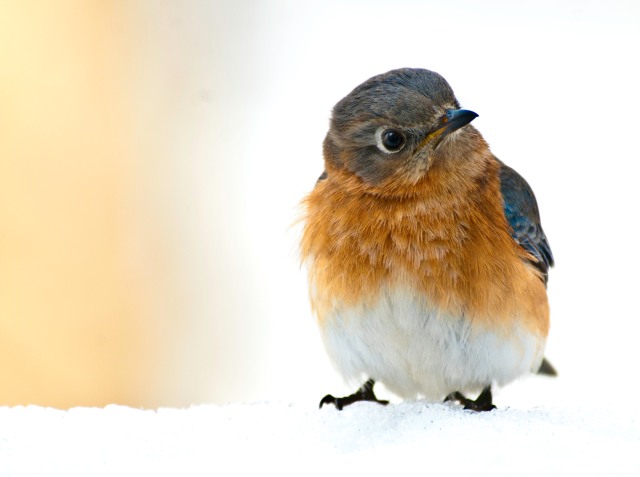 And, below is a photo that I took of another Eastern Bluebird two winters ago that was not enjoying the snowfall. The Bluebird certainly did not look happy. 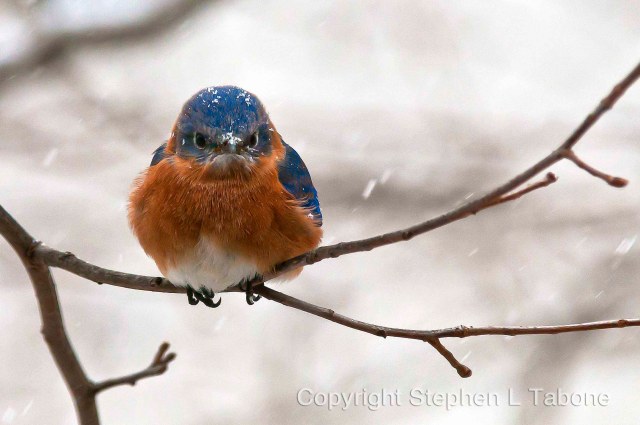 I will be checking the Merrimac Farm WMA Bluebird boxes several more times throughout this spring and summer, and if I see anything interesting and can photograph it, I will post it to my blog.