On Wednesday morning last week, I went in search of the pair of Barred Owls that I have photographed on several occasions. I was hoping to find them on their nest and possibly with young owlets. The owls are in a heavily wooded area alongside a creek that is only accessible by kayak.

When I got far up the creek, I found the owl’s nest, but it appeared abandoned, and the owls were nowhere in sight. I searched the area and waited, but they appeared to be gone. (My recent Barred Owl images can be see at:  http://stabone.com/p765775325/hec585a5#hec585a5). While up the creek, I saw a Great Blue Heron that got nervous when it saw me, and it immediately took flight, but not before I was able to get few photographs of it (opening image above).

Disappointed about the missing owls, I began to paddle out of the creek. As I approached the end of the creek, I noticed a couple of House Wrens flying back and forth to a tree. As I got closer, I noticed a large hole in the side of the tree, and the wrens were taking turns entering the tree with insects and other food. It obviously was their nest, and apparently there were young wrens in it. I got over my disappointment about the owls quickly, as I photographed the wrens.

Above and below are the wrens with food for their young. 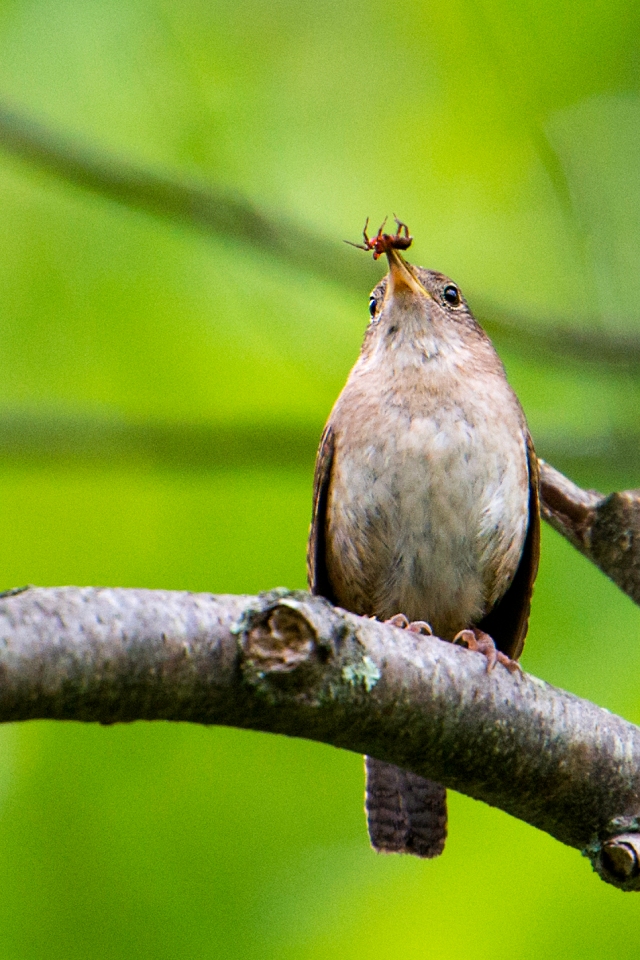 It was difficult to photograph the House Wrens, because there were frequent gusts of wind that blew the kayak around, and the nest was not well lit by the sun. I was constantly repositioning the kayak, or attempting to paddle with one hand while shooting with the other.

Although House Wrens are very common from Canada to southern United States, they were the first nesting pair that I have seen. During the summer and when nesting, House Wrens are very active and have a loud bubbling song. In fact, I was amazed how the wren with the spider in its beak (above) could still sing loudly without losing the spider. House Wrens are feisty, pugnacious birds considering their small size. They are known to occasionally destroy the eggs of other birds nesting in their territory by puncturing the eggshell. They also fill other birds’ nests within their territory with sticks to make them unusable.

Below are more images of the House Wrens.

So, although I was disappointed about not seeing the owls and thinking they had left the area, the House Wrens made my day.

Before leaving the the creek, I noticed several large (approximately 3 foot long) carp in the nearby, very shallow and muddy water. I have seen them before, and when they see me or feel my presence, they burst through the water to get far away. At times, it can be startling because it happens so unexpectedly. This time, I was able to capture their movement before they exploded away. 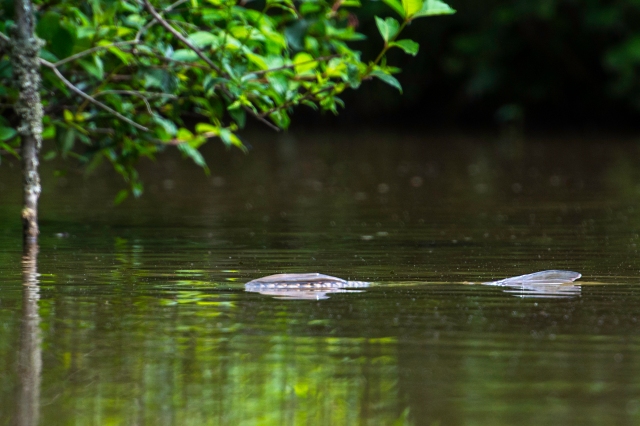 Last night, since the weather was cool, our windows were open, and for the first time in a long time, I heard the owls hooting across the lake. Apparently, they have not left the area. When I return in late June from Maine and Nova Scotia, where I will be photographing some of Maine’s and Canada’s breathtaking landscapes and wildlife, I will look for the Barred Owls again.

I am taking my laptop while away and expect to continue processing images from my recent Florida trip. I have started to review and process the images that I took of Pelican Island in Port Orange. It was an incredible sight. The entire island was covered with hundreds of Brown Pelicans and other birds sitting on nests with young birds in them. Below is one of those images. 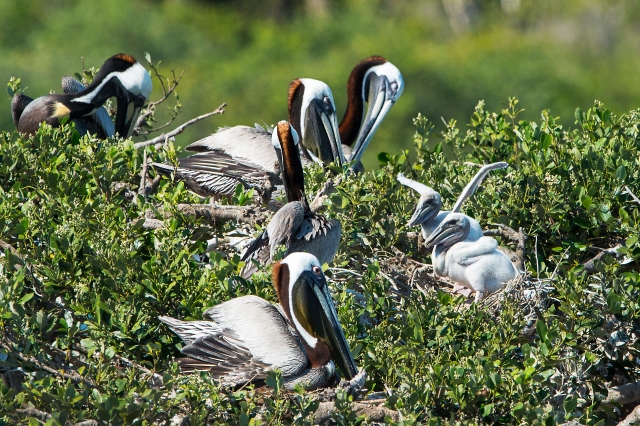 My next blog article will be from Maine.