Pied-billed Grebe with an Amphiuma at Paynes Prairie 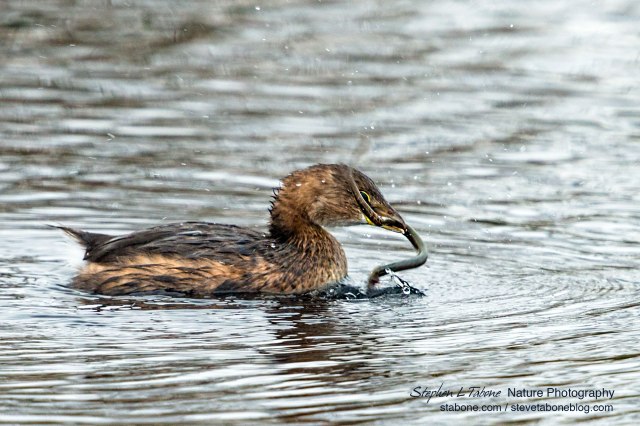 While on La Chua Trail at Paynes Prairie Preserve State Park in Gainesville,  Florida, in late December, there were several Pied-billed Grebes in the canal that drains into Alachua Sink. The grebes were diving and hunting for prey in the murky water. It is not unusual to see them surface with small fish and crayfish. However, as I was watching, one of the grebes surfaced with an Amphiuma (an aquatic salamander). I usually do not photograph grebes, but this was an exception, because the grebe was struggling with the Amphiuma as it was trying to position it for eating/swallowing. That behavior was worth capturing.

Grebes are very common at the Prairie and throughout South, Central, and North America, living on lakes, ponds, and marshes. They are medium sized, short-necked water birds, feeding on aquatic vegetation, insects, fish, amphibians, and crustaceans. Although they live on the water and appear to swim like ducks, they do not have webbed feet, but rather have lobes on their toes that aid in paddling.

Above, the Amphiuma is putting up a good fight, while trying to escape. Below, the grebe has positioned the Amphiuma’s head at the tip of its bill, getting ready to work it down its throat.

Pied-billed Grebes rarely fly. They migrate at night, and therefore, most people never see them flying. When danger is near, they dive below the surface of the water and can stay underwater for 30 seconds.

Pied-billed Grebes may breed and nest twice per year, laying between three to ten bluish white eggs. Young grebes may leave their nest within one day of hatching. Both parents participate in raising the young. Their numbers are declining in New England for unknown reasons, and some northern states have designated them as either endangered or threatened.

After “wrestling” with the Amphiuma for about ten minutes and tiring it out, the grebe was able to flip it into position (head-first) in order to swallow it (above image). It is hard to imagine that the Amphiuma tasted good, but it most likely filled the grebe’s stomach.

Note:  Thanks to Tara Tanaka, I corrected this blog article. I had misidentified the Amphiuma as a swamp eel. Based on my research, the Amphiuma looked very much like a swamp eel, but after further research, Tara is certainly correct. If you would like information on Amphiumas, you can read about them at http://en.wikipedia.org/wiki/Amphiuma. One amazing fact about Amphiumas is that they have 25 times more DNA than humans.